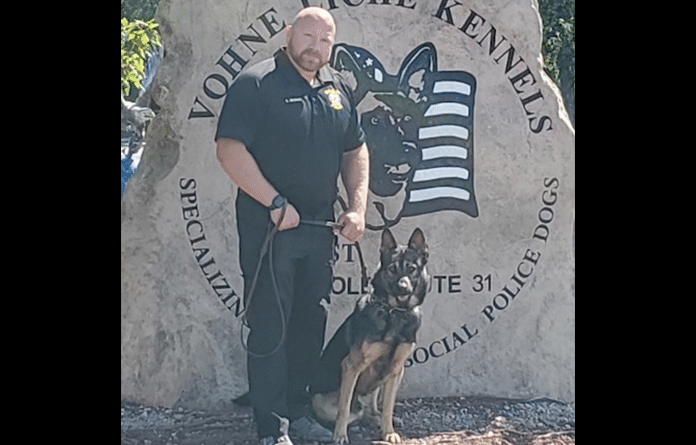 In a few weeks, the people of Waterloo will notice a new member of the Police Department: a fun-loving, hard-working German Shepherd named Tobi.

Tobi will officially make Waterloo his new home on September 24 after he and Waterloo Police Department officer Steve Moravec, his master, return from the Vohne Liche Kennels training program in Denver, Indiana.

Tobi, now around a year and a half old, was born in Hungary and was later taken to the United States for further training, where he met Moravec.

In Indiana, Moravec and two other drivers chose from eight K9s. There he and Tobi formed a special connection.

“What attracted me to Tobi was the way he detects drugs. He’s a big boy, so when I saw him I knew he was my dog, ”Moravec said.

Tobi is considered a dual-purpose K9. Not only is he trained to detect drugs, he can also track and apprehend people.

“It’s going to be a big plus because (in) drug detection, they’re trained to smell and their noses are thousands of times stronger than ours,” Moravec said. “With the tracking (and) how we recently had car break-ins and people crossing the area, these dogs can pick up the scent and get you to where they were last.”

Trained K9s take protection and service to a whole new level, not only ensuring the safety of the community, but also of their human colleagues.

“They are our protectors,” Moravec said. “If we have to look for a suspect in a building, they can come in and clean the building and limit the exposure of officers.”

After years without K9 in the department, the WPD is thrilled to have theirs. Moravec said he looked forward to Tobi helping other departments, just as the Monroe County K9s helped his.

“I think it will be good for our community to have a K9 in town,” said Moravec. “The county has two more K9s and they’ve been a big help, but it’ll be nice if we can get a little quicker response if we have to use the dog for anything.”

“He is a very endearing dog. He loves hugs and rubs, ”said Moravec. “What I love about Tobi is that he is perfect for our community because he is outgoing and when he works he can be counted on.”

Tobi will join the WPD with a $ 10,000 donation from the Waterloo Independent Order of Oddfellows Lodge 27. Tobi will be officially introduced to lodge members on October 17, where he will take a seat for a photo op.

“The contribution of the Oddfellows is greatly appreciated,” said Moravec.

Tobi’s arrival was a long time coming, as the WPD wanted a K9 ever since Sgt. K9 Ayla from Trin Daws has passed away.

Moravec said he jumped at the chance to handle his first K9.

“Our department saw who would be interested and luckily I had the opportunity to have a dog because I have always loved dogs and animals,” said Moravec. “I have a partner with me every shift now, and he’s going to be a great partner.”

Moravec said he was eager to learn more about Tobi and the other managers at K9.

“When it comes to training with a K9, you continue to train and I look forward to working with all of the local K9 managers. They train twice a month together, so I can’t wait to train with them and learn from them, ”said Moravec.

Bronson is looking for a ‘brother or sister’ to play with