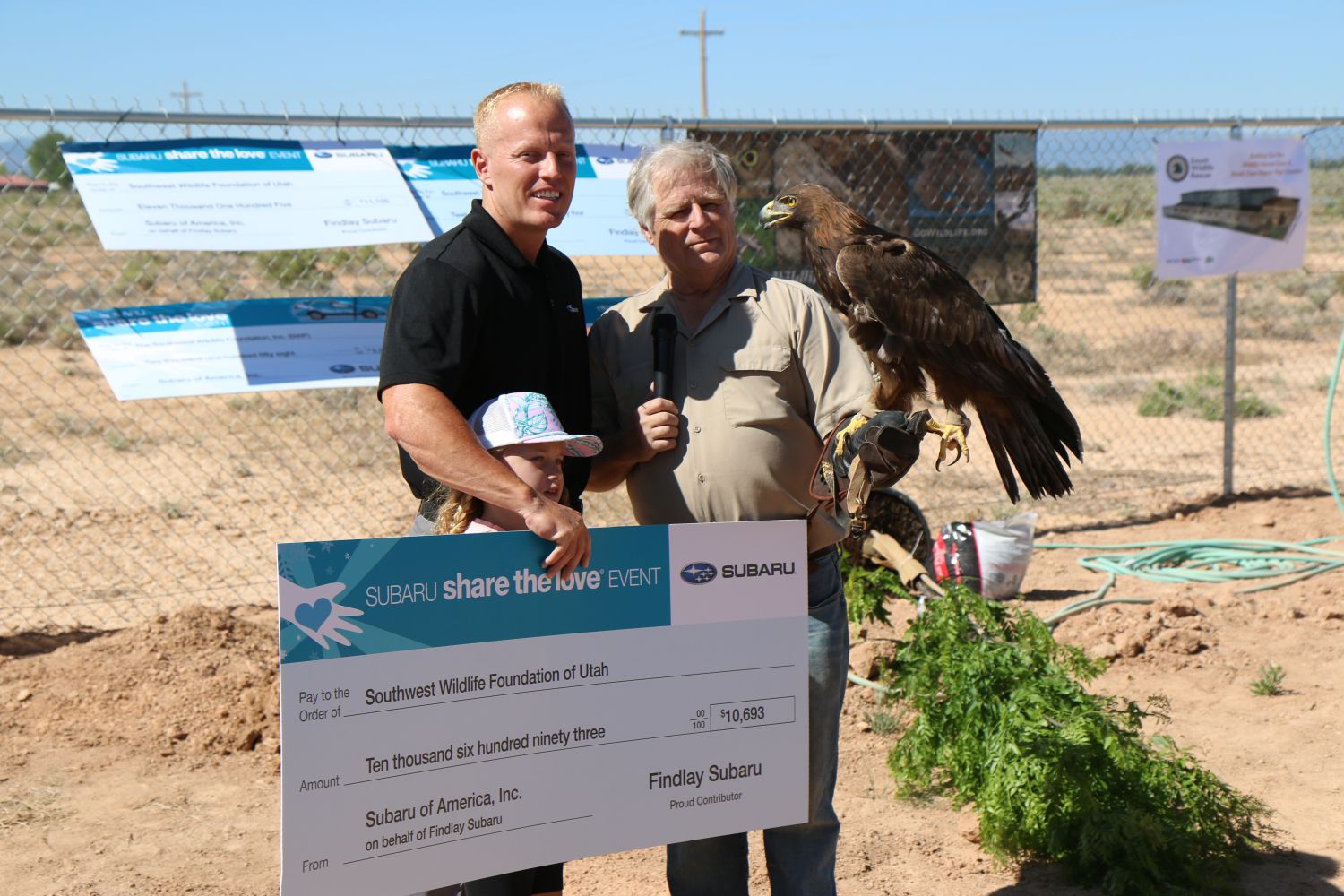 50 years is worth the wait (and work) for a dream to come true. This is the Wildlife Rescue Center for Southern Utah’s greatest wildlife ambassadors, Martin and Susan Tyner.

Groundbreaking for the center near the animal shelter and dog park in Enoch, Utah took place last Saturday. It was no ordinary groundbreaking, but a “putting down roots” ceremony to symbolize the laying of a secure foundation for providing world-class care to our feathered friends in Iron County and beyond. This included literally putting down roots as attendees were invited to help plant several trees. Of course, Tyner also brought out his 16-year-old feathered friend, a majestic golden eagle named Scout.

Joining the special occasion for the special occasion were Enoch Mayor Geoffrey Chesnut and City Administrator Rob Dotson, among others, who were instrumental in finding and providing land and water for the construction of the Tyners. Tyner expressed his gratitude, sharing that “The Mayor of Enoch and City Council rolled up their sleeves and presented us with a plan to lease the land to us for 100 years at a rate of $1 a year.” In Considering the benefits this facility will bring to Enoch (and beyond), it is a worthwhile investment. So much so that Bruce Hughes, a friend of the Southwest Wildlife Foundation, was willing to give a $100 check to fund a century of lifesaving.

St. George’s Findlay Subaru also helped put down roots. For the past 9 years they have supported the Tyner’s and their Southwest Wildlife Foundation with funds from their annual Share the Love Campaigns. Curtis Whitehead, General Manager, was on hand to present this year’s check, which will go a long way towards funding wildlife rescues and enabling more education in the community. He said: “We are excited to be a part of this and to help him (Tyner) and are grateful for the work he is doing and what this facility will bring.”

Speaking of work, the Tyners have spent most of their lives saving lives — “angels,” as they’re called in his book, Healer of Angels. Currently, the Tyners use their home as a rescue and rehabilitation center, caring for all sizes and types of critters. Among those they help and house are 7 babies barn owls, 2 babies great horned owls, 5 babies kestrels, 2 golden eagles, 2 peregrine falcons and a Harris’ hawk.

Not only will the skills of this new facility allow them to better care for the angels they are helping to rescue and rehabilitate them, but it also boasts a world-class flight chamber, giving the birds the opportunity and space to really fly their wings to spread out to move and be healed enough to be released back to where they belong, to heaven.

Upon completion, the Wildlife Rescue Center will be located adjacent to the Enoch Animal Shelter and Dog Park. For more information about the Southwest Wildlife Foundation, visit www.gowildlife.org.

The Westminster Kennel Club dog show begins on Saturday. A Kent breeder will judge the pooches