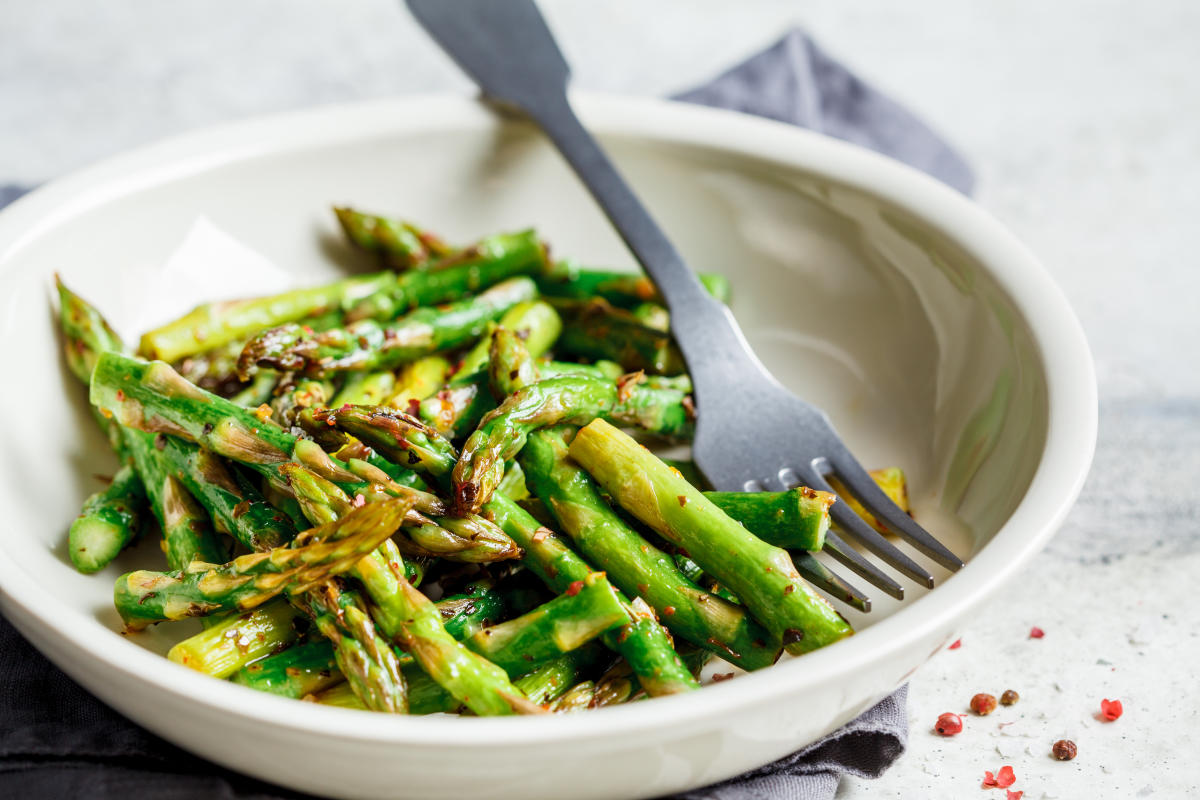 Why does your pee smell after eating asparagus? Experts explain

Asparagus is the spring vegetable par excellence. It’s crispy yet tender and can be used in everything from salads and soups to pasta dishes. It’s also packed with nutrients, including folic acid, calcium, and antioxidants, including vitamins C and E. The only downside: asparagus seems to cause an unpleasant odor in our urine.

What causes the smell? And how long does it usually last?

Asparagus contains asparagus acid, an odorless acid that breaks down into “volatile sulfur byproducts,” Dr. Christopher Smith, associate professor of urology at Baylor College of Medicine, tells Yahoo Life. The rapid evaporation of these asparagus metabolites during urination gives your urine a sour smell, like rotten eggs or cooked cabbage.

According to Smith, the smell can “start as early as 15 minutes after ingestion and last up to 14 hours.” But the exact compound or how many are the cause is still unknown.

Why doesn’t everyone smell the smell?

So why do only some people seem to get that strong smell after eating asparagus? Two hypotheses exist. The first is that some people just don’t produce the smell. A small study from 2010 showed that “about 8% of people have no or only small amounts of enzymes to break down asparagusic acid. So they don’t produce smelly urine,” Smith says.

The other hypothesis is that everyone produces the smell, but they may not smell anything. A 2016 study found that whether or not someone can smell asparagus pee is associated with genetic variation near several olfactory receptor genes. The study involved nearly 7,000 European American participants and found that about 62% of women and 58% of men suffered from asparagus anosmia, a genetic modification that means “they could neither perceive nor smell noxious urine,” Smith notes.

Since women are generally better at detecting smells, it’s possible that some women were too polite to mention the smell or didn’t notice it due to their position when urinating. More research still needs to be done on metabolism and genetics to determine the exact causes of these differences.

Are there other vegetables that change the smell of your urine?

Asparagus acid is only found in asparagus, although Smith says there are many other foods that can alter the smell of your urine. Garlic, onions, and Brussels sprouts, for example, all break down into sulfur compounds when digested. These foods also produce methyl mercaptan, a gas that smells like rotten cabbage and is released during urine and breath.

Is there anything you can do before eating asparagus to avoid the smell?

Unfortunately not, according to Smith. He says that one “cannot prevent asparagus from breaking down acid if the enzymes are present in their bodies.”

If you really can’t stand the smell, Smith recommends eating less asparagus or drinking lots of water to try to dilute your urine and therefore the smell. Despite its unpleasant smell after eating it, it is still recommended to continue enjoying asparagus in order to enjoy all its health benefits.

Maxine Young is a dietitian and personal trainer.

Want to get lifestyle and wellness news delivered to your inbox? Register here to Yahoo Life Newsletter.

step back in time field trip next Friday | news