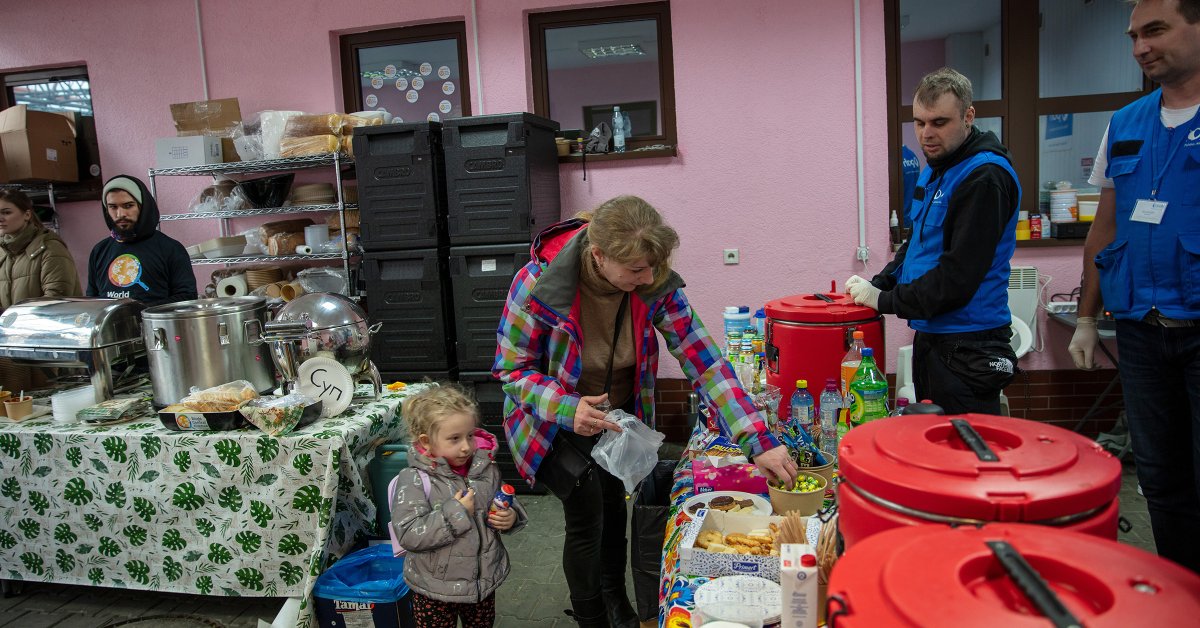 Ukrainian refugees try to find their way to Poland

Jhey get off the bus slowly, timidly. Young women holding the hands of small children. Grandmothers just behind carrying overstuffed suitcases or dragging garbage bags of clothes. All moms wear sneakers. There are a handful of old men, bent over. A lot of dogs, especially small ones, none bark. The passengers barely look up. Everyone looks dejected, exhausted. A Polish volunteer greets them and blows bubbles for the children, but the children don’t seem interested.

It is the main entry point at the Polish border, at Hrebenne, for Ukrainian refugees. It is one of the largest of Poland’s eight entry points for the more than two million Ukrainians who have traveled to the country of 38 million people. Normally this place is a passport control area, but nowadays Ukrainians don’t need passports to enter, just any type of identification that they are Ukrainians. A driving license. A phone bill. There are boxes of used clothes and toys. There is a room with coffee, cheese sandwiches and a giant box of fresh pierogis. They will be treated by a dozen volunteers, mostly Polish, who show unfailing patience and call the refugees “guests”. They have left Ukraine, but many, too many, do not know where they are going.

Most of the people on this bus are from Kharkiv in northeastern Ukraine, where Russian shelling has been relentless and endless. A woman in her thirties, dressed in a pink Superdry parka and a Nike baseball cap with long, shiny fingernails, walks over to where we are waiting. I kneel down to pet her handsome Rhodesian Ridgeback, who is leashed and muzzled. She said she had just escaped from Kharkiv.

“I didn’t want to leave,” she said. “When the shelling started, I first went to a school, thinking it would be safe. And then the Russians bombed the school. Then I stayed in a basement for weeks. I kept thinking the shelling would stop.

But when her house was destroyed, she decided she had to leave with her mother and what she called “my baby”, her dog. She has a husband and a brother who are still there. Her husband stayed to fight. She smiled sadly and said her brother was too skinny to fight. She looks a little dazed.

“I can’t figure it out,” she said. “It seems impossible for that to happen.”

And then, looking at all of us.

Ukrainian refugees at the Polish-Ukrainian border crossing in Hrebenne, Poland, on March 14.

I was in Poland with a team from CARE, the global humanitarian organization of which I am a board member. We accompanied CARE’s CEO, Michelle Nunn, who was visiting this Polish start-up for the first time. CARE funds the work of this reception center, which is managed and staffed by an agile local partner, the Polish Humanitarian Action (PHA). Inside the simple two-room center there is a place where refugees can register for cash assistance ($1,500 per month for a family of four).

Read more: The Last War in an Age of Impunity

The Polish humanitarian action team here in Hrebenne is led by a certain Dariusz, who is a former colonel in the Polish army. He is stocky, with a shaved head and a shorn but sympathetic manner. He said they had as many as 3,000 refugees in one day, but never less than three hundred. More than 90% are women and children. Most come by bus, some by car, a few on foot. In the beginning, there were many more cars with wealthy families who had destinations and contacts. Always, there are children. Darius said a mother arrived with a two-day-old baby. There were also all kinds of pets, Dariusz said, including snakes. Yesterday there were two parrots.

But now it’s the 53rd day of the invasion, and the refugees have fewer choices. This second wave is older, poorer, sicker, more vulnerable. We see a number of people with disabilities. These are people from the east, who have been traumatized by the bombings. “We don’t push them,” Darius said. “We let them catch their breath.

A woman with four young children and a diamond nose approached my interpreter and asked in Ukrainian, “Where do I go?”

Translator: “You mean in Poland?

The woman said, “No, anywhere.”

Many seem lost. I don’t even know where the next stop is. Very few of them speak Polish. There are other buses to take them to Warsaw, which is about four hours away. Some of the refugees were meeting family and friends in Warsaw. I met a young mother and her son who told me they were going to Austria. Another family says they are going to Germany. They all have a three-month window during which they can travel anywhere in the EU without needing a visa or applying for asylum. Dariusz reported a young mother and her three children traveling to Ireland, where a family offered them accommodation.

Poland has been generous in accepting Ukrainians. One in five people in Warsaw is now Ukrainian. The Poles seem moved by the fate of the Ukrainians. There are blue and yellow flags everywhere in the city of Warsaw. Yes, you hear some complaints that Ukrainians are taking Polish jobs. But most have the attitude, there but for God’s grace we will.

CARE President and CEO Michelle Nunn, left, and Deepmala Mahla, CARE Vice President for Humanitarian Affairs, comfort Liudmyla Staston, a teacher from Ukraine, who has just received certification in Poland to teach children refugees, at the Palace of Culture and Science in Warsaw, April 14.

We visited a refugee center the day before in Warsaw, which was much less grim than the border. The tents had blue and yellow balloons. The little boys were playing football. We also visited the headquarters of an innovative program supported by CARE and run by a Polish humanitarian organization called the Polish Center for International Aid, led by a dynamic former UN official, Wojtek Wilk. He hires Ukrainian women as teachers in Polish schools for the 25,000 Ukrainian students currently divided into classes in the Warsaw region. Most of the women hired were teachers in Ukraine. We visited the place where they interrogate the women. It was housed in what was once known as Joseph Stalin’s Palace of Culture and Science, Stalin’s gift to Poland. Since the fall of the Berlin Wall, many Poles have demanded that the gloomy gothic socialist skyscraper be demolished. Inside, it looks like a job fair. If hired, teachers work six hours a day and are paid $40. About 250 have been hired and the goal is to reach 1000. But even that is a small number compared to the number of Ukrainian children in Poland.

Read more: Ukraine is our past and our future

At the center, I met a former Ukrainian teacher named Daria who had been hired by CARE to help find teachers. She had only been in Warsaw for a week. She said she traveled to Warsaw from kyiv with her mother and ten-year-old son after traveling through Moldova, Romania, Hungary and Slovakia to get here. “I thought it was safer that way,” she said. Her 63-year-old father refused to leave. He said he hoped to join the army even though he was over the upper age limit. But he kept showing up, and they made him a driver. Sometimes he drives all night. But he can’t say where.

Almost all financial assistance to refugees in Poland comes from the private sector, from international NGOs such as CARE and Doctors Without Borders, with Polish partners on the ground. But the scale of the refugee problem – 4.5 million people who have fled Ukraine – 2.5 million in Poland, 600,000 in Romania, 450,000 in Hungary, 400,000 in tiny Moldova – requires government support international. Putin doesn’t just want to destroy Ukraine, he wants to destabilize Ukraine’s democratic neighbors with a deluge of refugees. The West cannot let this happen. The warm welcome will not last. Refugees will also need psychosocial support. CARE estimates that 80,000 Ukrainian women will give birth in the next six months. The United States, the EU and the UN should provide long-term financial and infrastructural support to the countries hosting these Ukrainian guests.

All the refugees I spoke to said they wanted to return to Ukraine when the war was over. Or before. No one was really looking to start a new life somewhere else. People said they wanted to rebuild their homes and their lives. In fact, going to the border post, there were more cars entering Ukraine than leaving it. I found people more puzzled than angry about what was happening to them. Most of these people had lived with the violence for weeks. They had lived next to Russia all their lives. No one really had answers. All were grateful for the Polish generosity. Most say “Spasibo” over and over again, in Russian for thank you.

Before leaving the border post, I stood in line to have a coffee with a tall octogenarian gentleman. He too had come from Kharkiv. He said he didn’t want to leave, but he shrugged and said his daughter insisted. It turns out he was a physicist who had worked for decades at the Kharkiv Institute of Physics and Technology.

I asked him why he thought Putin attacked his homeland.

He shook his head and said, “I can’t explain it. It is not logical.

Prospective Pet Owners: Prepare for thousands of bills before bringing home a furbaby