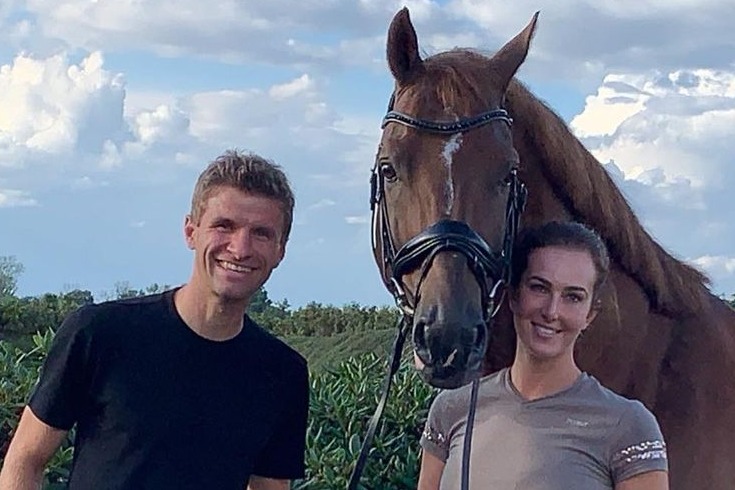 BAYERN MUNICH legend Thomas Muller has been slammed by an animal rights group… after his award-winning stallion was injured while rehearsing for breeding season.

It comes as West Ham’s Kurt Zouma has come under heavy criticism since SunSport revealed videos of him kicking and slapping his pet cat.

Now Germany striker Muller has been slammed by Peta after revealing the strange injury suffered by his horse D’Avie, nicknamed ‘Dave’.

The World Cup winner and his dressage champion wife Lisa run the Gut Wettlkam stud farm in their home country.

They charge 200 euros per dose of frozen horse semen.

Muller reported: “Unfortunately, we have bad news. Our favorite D’Avie will not be available in the next few months.

“Unfortunately he slipped during a test attempt to prepare for breeding season and fell dramatically to the side.

“He suffered a hoof injury and will need to rest completely for the next few months.

“He’s a badass, and it could have been worse.”

But Peta’s spokeswoman, Jana Hoger, fumed: “It’s awful that so-called horse lovers force the animals in their care to perform unnatural sexual acts in order to get the most out of them.

“The injuries sustained by D’Avie under the supervision of Lisa and Thomas Muller were preventable and unnecessary.”

D’Avie, or Dave, has been ridden twice by Lisa in international riding Grands Prix.

Dave is joined at Muller’s headquarters by two other stallions – Four Roses and Bowmore, whose semen is also sold by the couple.

Muller is the eponymous “carrot manager” at the stables.

Muller regularly attends dressage events that his other half competes in and loves spending time with Dave.

“I come here to see if everything is okay,” he once replied when asked why he liked horses.

“And for carrots. I’m the general manager of carrots! I watch the dogs. Sometimes I help out a little but that’s her (my wife’s) business.

“I like it a lot. They make me feel comfortable, the attitude and what they look like and (the way they) live their life.

“It’s fun. It’s easy to relax around the horses.”