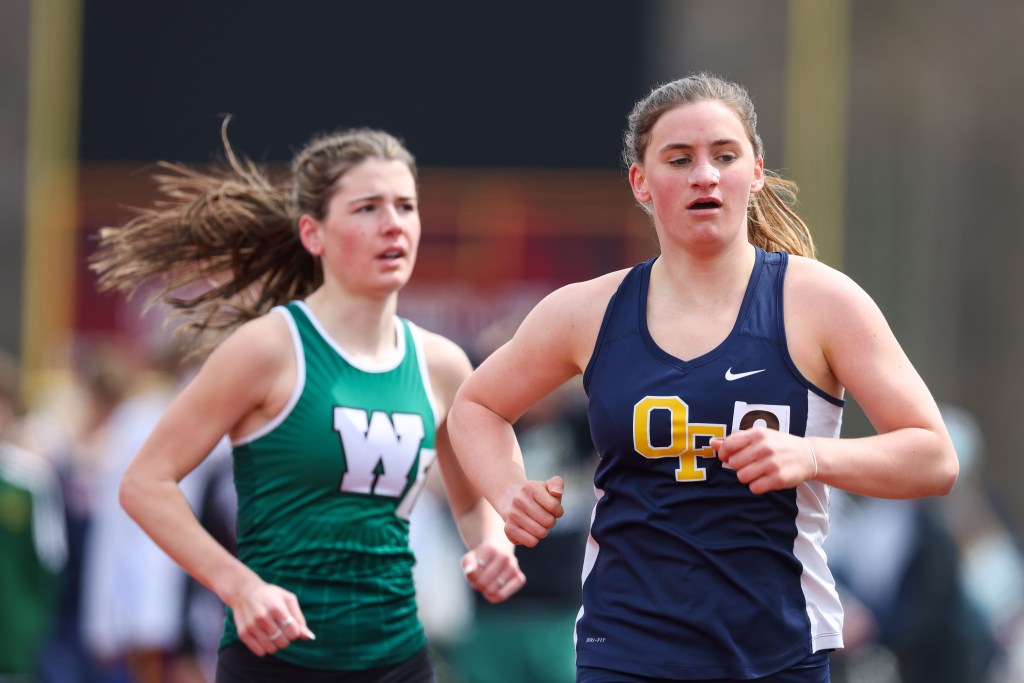 Those familiar with the history of women’s high school distance running in Ohio know that Olmsted Falls has a rich tradition.

The duo have worked together for the past three years to resurrect the Olmsted Falls distance program, posting performances from all over Ohio in track and cross country. The two were All-Ohio twice in cross country, and Katsaras placed sixth in the 3,200-meter race at last year’s track meet. Katsaras has signed to compete for Bowling Green next year, while Clute is a junior and in the early stages of his recruiting process.

“I’m sad this is our last season on the track together,” Clute said. “That’s the not-so-great part of it all. But I’m looking forward to all the fun things we can do for the rest of the season.

Both grew up in the Olmsted Falls community and actually played on the same junior football team, but didn’t really know each other until they started training together three years ago. Now they’re a matching pair that fits together like they were meant for each other all along.

“We really understand each other,” Katsaras said. “When we’re on a practice run and Katie does a move, I already know she’s going to do that move. We know each other so well, and that really helps when we’re training through the tough workouts. It really benefits both of us.

Clute also sees the benefits of having a top sparring partner.

“We do all of our errands and everything together,” she said. “I’m very lucky and grateful to have someone like her that I can train with and talk to. We don’t train against each other. We train together to improve each other. There is no bad competition between us, everything is better and works hard together.

“Lillie and Katie in particular are very hard working and really coachable,” she said. “Each of them would do what they had to do on their own. But on the days that they’re both here and able to run together, which is usually their recovery runs, they can just run, and they talk, and they can come up with ideas and complain, and do it in their own small bubble and evacuate as much as they need.

Alexander is the common denominator of Olmsted Falls’ success. She was the coach in the 80s when the first round of success happened, and after a long period of coaching in Strongsville, Medina and Brecksville, she has returned and now oversees the growth of Clute and Katsaras.

“I think it’s really cool that she was here back then and built a really strong program, and now we’re a part of that as well,” Clute said. “Last week was so cool because we broke the school record of 4×1,600 that they set 40 years ago and now we have it. And she trained us both.

Over the past year Katsaras has found herself in an interesting position as Clute has really taken off and is now performing nationally. Last year, the two were about even in their performance. But Katsaras is not at all bothered by the fact that she would be the stallion of most other schools.

“I’m more than okay with that,” she said. “It’s going to help me take it to the next level in college. I am very grateful to have someone who is faster than me that I can train with. A lot of those people who are top dogs don’t have that. I’m just very lucky.

Both have very high goals as post-season fixtures are just around the corner. The two hope to be able to set up a 4×800 relay that can travel to Columbus. Katsaras recently discovered that her iron levels were low, so she took supplements to regain her strength and endurance. She remains optimistic for the rest of the season.

“I am convinced that I will be back by the end of the season,” she said. “I know I’m going to do well. But I feel like there haven’t been too many opportunities this season because of the crazy weather. But it will eventually work out. I know I will finish strong.

Clute has finished first in the 3,200m at the national indoor meet for the past two seasons, but said she’s not sure yet whether to run both the 1,600m and 3,200m or focus only on one race. In March, she placed sixth in the two-mile at the New Balance Indoor Nationals, and last week she placed third in the 3,000m at the Penn Relays.

“The goal would be to win the state meet in whatever event I end up doing,” she said. “And then go to the national meet and do my best there and see what I can do on the national stage.”