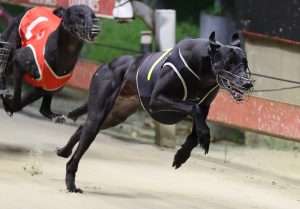 It will be touch and go if John Richardson is at Wentworth Park on Saturday night.

John recently underwent surgery and was only released from hospital last Thursday.

The lure at Wentworth Park will likely be the final race start for hero Wenty of John and wife Judith Sunburnt Highway, who is racing the Masters Meteor (520m) final on his 152nd race start.

The son of Oaks Road and Where’s Kitty will strive for an incredible 52 wins and 40 wins at NSW Racing headquarters at Wentworth Park.

“John could be there Saturday night,” Judith said. “But we’re not sure yet.”

Judith and all greyhound races are impressed with longevity, but the continued success of “Billy” (as he is known in the kennels) has shown and is loved.

Sunburnt Highway is just a wonder.

Watch trainer Judith Richardson’s wonderful emotional reaction last night as her beloved greyhound won her Masters Meteor race, after what has been a tough week for the Richardsons…

Judith tells the story of a six-year-old child (he will reach that age in August) who loves to run, to compete and who is not happy not to.

“At home, if we swipe the other dogs, he’ll act until he’s had his canter,” she said. “Afterwards, he is happy.

“Normally he’s such a relaxed dog, but when the lure starts he’s totally professional.”

Raised until the age of eight months by co-owner Gary Cluse at Casino, Billy never stopped giving Gary, John and Judith and their family glorious times.

“When he won his first race at Wentworth Park as a two-year-old,” Judith said. “Well, that was special.

“Then when he won the Meteor it was wonderful, but when he broke Bessy Boo’s record for most wins at Wentworth Park (35) it was even better.

“It’s all about Billy. He deserves all the accolades he receives.

An amazing feature of Sunburnt Highway’s credentials is that he had won his first race (starting 11) even before one of Saturday night’s TAB Million Dollar Chase finalists was born.

Judith says Billy has only ever had one injury, and it was a slight strained chest muscle, when he grabbed the lure at the end of a post-to-post slide at Wentworth Park he a few years ago.

“Other than that, he’s been perfectly healthy,” she said.

“He’s drawn in the four for the final,” Judith said. “I don’t mind the middle for him, but I would prefer him to be drawn in an odd box. He seems to jump better.

Judith thinks Kooringa Lucy is the hardest to beat in the final on Saturday night.

The Richardsons are so grateful to have Billy in their lives.

“He made our lives for us,” Judith said.

“We never, ever thought we would have a dog like this. There will never be another dog like him, especially with Wentworth Park closing in the future. His record number of wins will remain the records forever.

While no decision has been made regarding whether John will be at Wenty on Saturday night, the Richardsons are also facing a problem simply getting to the track.

“Billy goes to see Wenty in the car and you never hear him on the hour and a half drive from Dapto to the track,” Judith said.

“But on Saturday night we also have My Free Reign in the Ladies Bracelet final.

“Unfortunately, the only time we took the dog with Billy, she got up all the way. We are considering taking Miss Free Reign in ‘the truck’ with our daughter Michelle at the wheel.”

John Richardson has done a study on greyhound nutrition, fitness and health, which he and Judith stick to religiously.

Their 26-year-old grandson, Patrick, has become the kennel’s right-hand man and Judith says he “lives for the greyhounds”.

Although she and John have pretty much decided that Billy will retire after Saturday night, they are unwilling to say for sure.

“A couple of breeders across the country have asked us to use it at stud and a breeder from Queensland wants 10 vials,” she said.

“But I’m not sure if Billy will want to retire. He won’t be a very good pet.

“He arrives at Wenty and goes to sleep in the car while waiting to be kenneled,” she said. “He goes into the scales and gets himself checked. It’s so laid back, but the moment the lure kicks in, it lights up.

step back in time field trip next Friday | news

Is a ‘Rare Dog Breed’ in YouTube Thumbnails Real?