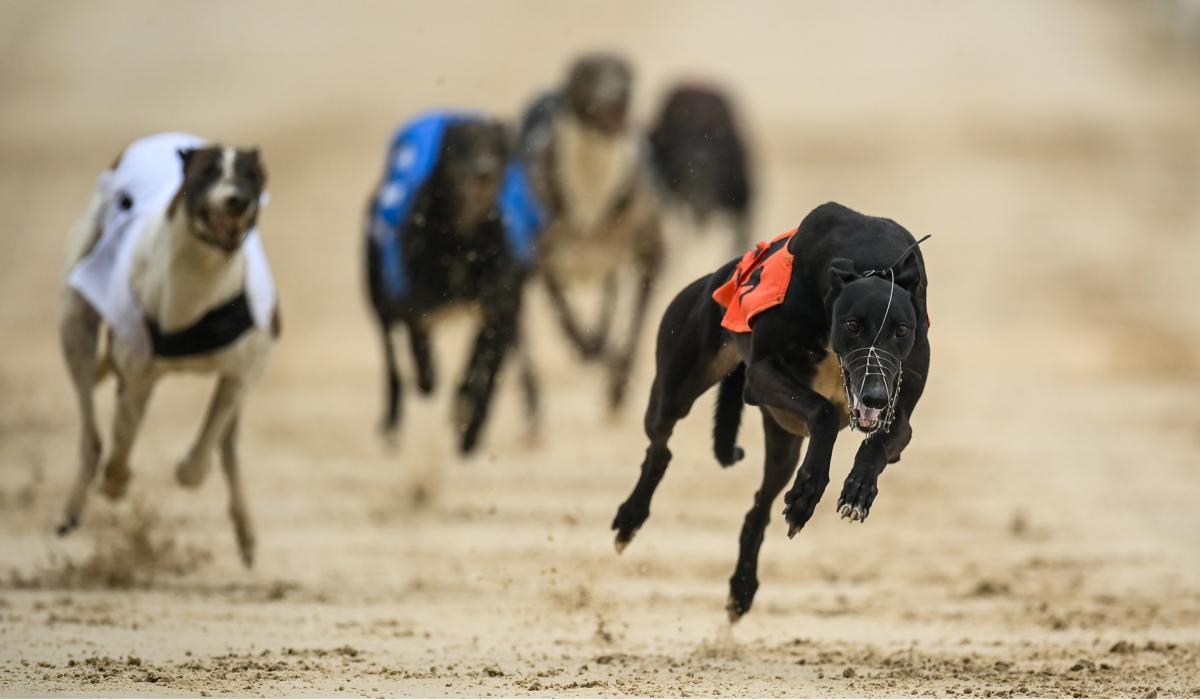 Recently we had to wait until Friday for our first Offaly winner, but unfortunately the wait lasted until Saturday this week. Winners were rare but were of high quality when they happened. Lots of finals at the tracks this week, especially in Shelbourne and Clonmel to coincide with the national race meeting. Over €50,000 has been given away this week in prizes as part of the first big win week of the year so far.

The first final of the week took place in Tralee, the Brendan Cremin Electrical Tri-Distance A3 stake on the 550 yard course. A shock here, however, as Lady Sydney (Droopys Sydney-Bossleigh Jet) had a good night’s sleep to win her only run of the competition in 30.67, by three lengths at 3/1, the check for €1.45k going to David Fleming.

Two more finals at Shelbourne Park, each worth €1,000 for the winners. In an unrun ON2 stake, Ballybough Sean (Dorotas Wildcat – Jackeen Flyer) was the winner by four lengths in 29.14 for trainer Murt Leahy and owner Pat Carroll at 3/1. Laughil Flash was second to Kilcormac owners Mary and Paul Jennings. The other final was in an A4 contest, Ballymac Lizzy (Ballymac Matt-Ballymac Breeze) for Liam Dowling by a neckline in 29.11 at 5/2.

In the first round of an A3 stake, three runs were run with Airlie Bomber easily making the fastest run and winning by two lengths in a fast 28.34 at 5/4 with drive Kevin Losty of Clonard.

In Clonmel in the semi-finals of the unreleased Philomena Dunne memorial ON2 stake, Jackstavern Bella won the first in 28.70 by seventeen lengths with Graham Holland training for the Pillar Syndicate. The second semi-final went to Gleam Of Love for local owner John Leahy in a more modest time of 29.13 by five lengths.

The first Offaly winners of the week were at Mullingar, in the semi-finals of an A6 draw, Killeshill Nico was an easy three-length winner for Croghan owner Vincent Lynch in 30.18 (60 slow) to 1 /2. In an A5 race, Kilbride Dan won by four lengths for Geashill trainer Margaret Bolton in 30.04 (60 slow) at 3/1.

At Shelbourne Park the first Grand Final of the year was the RCETS AAO Gold Cup 525, the winner here Skywalker Barry (Droopys Jet – Calzaghe Jan) has been one of the top winners in the country for two years now. He has now won the Dublin Juvenile Derby, the Select Stakes at Waterford, the Clona Blaze @ Stud at Cork and the AO entry at Shelbourne in December and last night’s €16.2k top prize has now taken his winnings to career at more than 68 k€. For his owner Ray Patterson, it’s so deserved that he’s invested a lifetime and a small fortune in buying dogs for the industry he loves. For trainer Michael O’Donovan it was a special race as he also won second place in Serene Ace and he won €6.5,000 and he also raised over €28,000 in prize money. The winning time was 28.36, Skywalker only won by a head and came back at the price of 2/1.

Two Offaly winners on the supporting card, in the endgame of an AO stake. Last week’s Tribune Dog of the Week Thirtynine Winks (Laughil Bolt- Combined Efford) showed his class again winning in 28.50 by five lengths at 4/6 fav with the €1.5k check to the owner of Edenderry Thomas Glynn with coaching from David Murray.

In an A1 550, Muffin earned his eighth career victory for Edenderry trainer David Hanlon in a decent 28.97 by a length at 2/1.

Three Offaly winners at the morning meeting at Mullingar, including a brace for Margaret Bolton. In an A7 category, Liogarbh Jet won by two lengths at 9/2 in 30.33. Her other winner was in an A4 contest as Crackon Daisy also won by two lengths, in 29.85, at 9/4. Our final winner of the week was Shady Dawn for Daingean owner Oliver Etches in an A6 run at 30.01 by three lengths at 5/2. All races at Mullingar were graded 0.60 nits.

Clonmel, what a night of racing with seven finals and €25,000 given away. The biggest final of the evening was Rural Kennels ON2’s unrun entry, with the €6.2k top prize for Swords Rex (Droopys Sydney – Starry Display) for Graham Holland in a magnificent 28.28 by a head with Droopys Nice A second for Murt Leahy obtaining a price of 2.1 k€. In the five heats, Swords Rex has won four times and is a well-deserved winner of the first non-race entry of the year. Expect to see more of this pup as the year goes on.

Other finals in the evening, first of all, the Horse and Hound A3 Guys and Dolls stake, with the €2k purse going to Hollyhill Jasmin (Laughil Duke – Leevalley Dancer) in 28.50 by three lengths. In the Savana Open 750 final, Redzer Ruinart (Kinloch Brea – Redzer Ruby) passed the post first in 41.57 by eight lengths for Pat Reddan. €1.8k to the winner here. In the A1 550 final, Lynchy Boy (Confident Rankin-Boozed Bubble) once again proved too strong for his opponents, winning in 30.15 by nine lengths for Paraic Campion. €2,000 also to the winner here. First class race night in Clonmel with the star of the night being the winner of the unrun ON2 Rural Kennels, Swords Rex.

Friday Philomena Dunne ON2 Memorial Final in Clonmel. Saturday, final of the A6 event at Mullingar.

Tribune Offaly dog ​​of the week

For the second week in a row, Thirtynine Winks gets the nod by winning an AO entry at Shelbourne Park on Saturday, for Edenderry owner Thomas Glynn, in a speedy 28.50.

Seven Offaly winners this week, well done to all involved.

Chipotle with drive thru may be coming to Hamilton, NJ