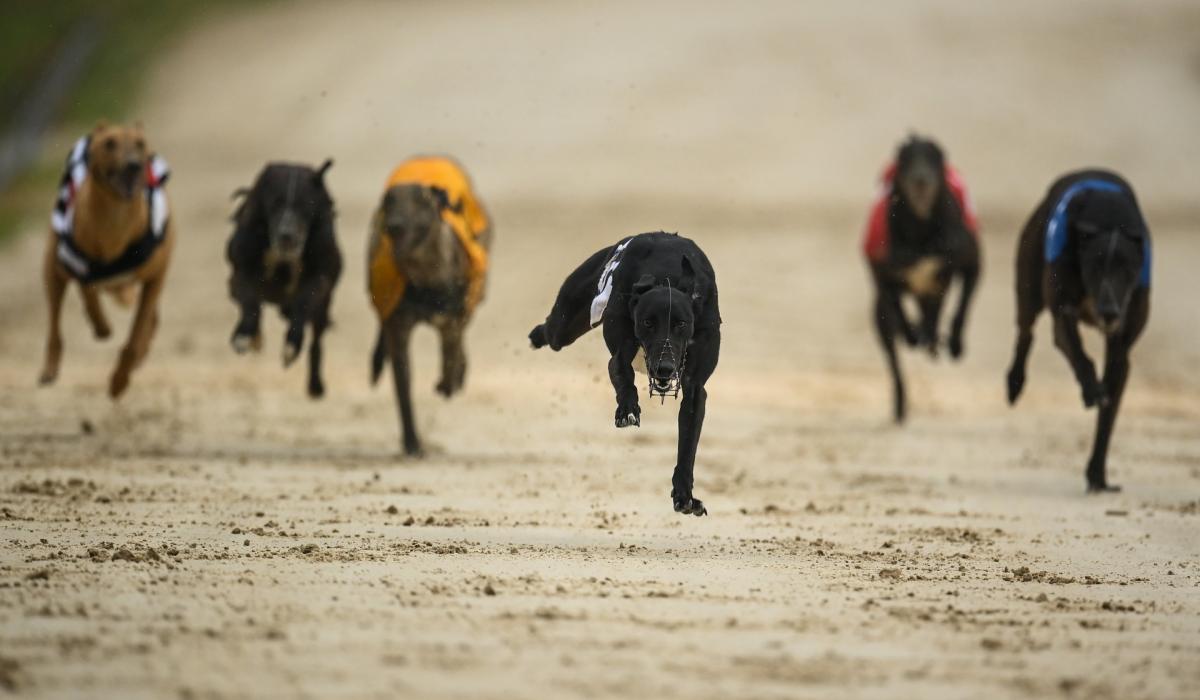 Gone to the dogs: Incredible week for Offaly dogs with 11 winners

After the conclusion of the first big prize event last week, the Bresbet Easter Cup, the races intensified with the start of the first round of the second most valuable stake in the country, in Limerick, the Con and Annie Kirby Memorial.

Sponsored by Limerick’s best Noreen and JP McManus, with a prize money of €80,000 to the winner, the country’s best young dogs came from far and wide to try their luck in the first round on Saturday. In addition to these events, there were seven high-profile finals around the tracks up for grabs in what was another great week for racing in Ireland.

Races at the start of the week

Thursday, Shelbourne, the first final of the week was an unreleased ON2 that hasn’t been able to progress through the heats for a few weeks. First prize of €2,000 went to the impeccably bred Maries Wedding (Droopys Sydney – Ballymac Petsy) and Dolores Ruth in 28.82, by nine lengths at 2/1.

The first Offaly winner of the week was in the semi-finals of an A4 female dog stake, Coolemount Raven won by shortest of heads, in 29.64 at 2/1, for Croghan trainer Gerry Merriman. In the 750-yard A3 final, Glasmeen Gem (Droopys Sydney – Ballymac Fifi) won the €1.2k purse for Declan Kelly in 42.62 by two lengths at 2/1. Offaly’s second winner was in Limerick as Brunswick Billy won an A5 race in 29.46, by a length at 7/2, for Geashill trainer Margaret Bolton.

Enniscorthy hosted the second round of the unrun Future Champions and Michael Fortune Memorial Open, also on Thursday, eight innings, all in super winning times. The fastest of them was Stefans Rock for Shea Campbell in a searing 28.90 (20 slow), by five lengths, at 4/6 fav. One for laptop.

There was plenty of top racing around the tracks on Friday. At Shelbourne Park, in the final of an A3 event, Costa Candy (Dorotas Woo Hoo – Borna Candy) crossed the line first and won the check for €2.2k for the Costalot Syndicate, in 29.15 at 7/2, from three lengths.

Newbridge had one of its big final nights of the year, the unreleased female Brownstown Tango and NTSC Open, won last year by Good Diva for John Kennedy. A nice line and expect to see more of the six as the year progresses. The winner of the €3.2k pot was Tullymurry Faith (Droopys Sydney – Droopys Ring) for Damian McGinn in a handsome 28.6 by two lengths at 9/4. Expect to see this female dog next in the Puppy Oaks which will start shortly in Shelbourne.

Kilkenny also hosted the final of one of their top annual events, the Ballymac Anton @ Stud McCalmont Cup A1 participation. Local trainer Murt Leahy won this bet again, having won it last year with Dark Devil. Murt succeeded this time with Zoom (Coolavanny Jap – Droopys Dorothy) in 28.90 (30 slow) at 9/4 with €5k to the winner here.

The conclusion of the Galway Stadium A3 contest was the culmination of a decent card at the country’s only racing stadium west of Ireland. Another fine line with the €4K prize, still staying local, as Headford Honey (Tyrur Bigmike – Headford Fantasy) won by three lengths for Seamus Leahy in 28.90 (20 slow) at 6/4 fav.

The first Grand Final of the year at Curraheen Park was Cork Oaks 2022. The trophy remained with Graham Holland, after winning it last year with Cloda Skye he had Millbank Chosen (Dorotas Wildcat – Droopys Sylvia) on the winners’ podium in a rapid 28.26 (10 rapid) by four lengths at 2/1. €5,000 to the winner here with Cielo runner-up to Owen Mckenna winning €2,000.

The thirteen races in Limerick were the first rounds of the Con and Annie Kirby Memorial Stake. Seventy-eight dogs lined up for the nation’s top juvenile event, all vying to claim the title from last year’s winner Stonepark Leo, trained by Mark O’Donovan. Some exceptional races delivered on the night with most of the top trainers having a winner and a one-two for Pat Buckley. The fastest winner of the night’s run was Deadly Showtime for Laois coach Karol Ramsbottom, in 28.16, by eight lengths. Others to impress were Ballinabola Ed for Buckley in 28.23, Kilgraney Sydney for Thomas Buggy and Glengar Scholar again for Buckley in 28.24. Lots of racing to do in this stake still with forty-eight dogs still standing.

Five Offaly winners at Mullingar, on a track rated 0.60 slow, there were still some great races to finish. Our first winner was in an unprecedented ON2, Wee Castle won by seven lengths in 29.87 at 4/7 for Edenderry coach David Hanlon. In an A5 grade, Demise Rose was first after the post for Tubber owner Joe Keyes at 30.09 by three lengths at 4/1. In an A4 draw final, Korando (Sh Avatar- Boynepark Smarty) won the top prize of €500 for Rhode owner PJ Cocoman in 29.58 by four lengths at 4/1. Our next winner was in an A4 contest, Beechgrove Lady won in 30.05 by seven lengths at 2/1 for Ballycommon owner Peter Raine. In the semi-final of an A1 double distance stake, 525/550 yards, Hear It Babe had two lengths to spare on her rivals, in 29.72 at 5/2, for the owner of Clara Bernard (Sonny) Walsh. Another final to note, in an unprecedented ON3 event, Hennos Norm (Greenwell Hulk – Joshs Henno) won in 30.21 by two lengths at 3/1 with the first prize of €900 for the owner of Meath Patrick Henrick.

At headquarters, the dogs paraded for the first round of the Shelbourne Open 600-yard stake, won last year by the great Ballymac Wild for Liam Dowling. Four innings with Allforthebest fastest for the HDJ Syndicate at 32.30 by four lengths at 4/6 fav. This dog will take a beating in this stakes having already proven himself to be the best 600 yard dog in Shelbourne when he won the trip to the Race Night Winter Festival. An Offaly winner on the backing card, in the Skywalker [email protected] A1 double distance gamble final on the 575/600 yard course, Geneva Holly (Droopys Sydney – Newinn Boodles) was the first to home in 32.58 from a length at a decent 8/1 with the €2,000 purse to Kinnitty owner Jeannette Mackenzie.

At Kilcohan Park, the semi-finals of the Waterford Open Select Stakes took center stage, both won in identical times of 28.44 (10 rapids). Last year’s winner Skywalker Barry took first for Mark O’Donovan by three lengths at 2/1, recording his twenty-third career win. The second semi-final went to One Time Only for Thomas O’Donovan at 8/1 length beating a few dogs at very short odds in the process. The first prize in Saturday’s final will be €9.5,000 for the winner. A final in Waterford worth mentioning was bookmakers Paddy and Ciara Sharkey and WTSC A2 575 entry. A worthy winner here of the €2.1k pot as Ballymac Freya (Ballymac Bolger – Ballymac Cameo) won all previous rounds and the final in 31.33 by two lengths at 5/4 fav for local coach Deise Declan Byrne.

Three Offaly winners on the morning at Mullingar, the first two were in A4, Lingrawn Elody won in 29.77 by two lengths at 5/2 for Moneygall owner Mary Jones. Horseleap Nelly continued her last good form winning again for Sean McGuinness, in 29.90 by two lengths, at 5/4. Our final winner of the week was Kilbride Dan in an A5 grade for Margaret Bolton, in 30.02 by two lengths, at 10/1. All races at Mullingar were graded 0.60 nits.

Thursday, quarter-finals of the unpublished Champion in Enniscorthy, final of the stake A4 female dog in Shelbourne. On Saturday, the A1 double-distance stake final in Mullingar, the Waterford Select stake final, the Shelbourne Open 600 semi-finals and the Con and Annie Kirby Memorial second round in Limerick. Many exciting races are waiting for you.

Tribune Offaly dog ​​of the week

Easy decision this week with Geneva Holly winning the A1 600 final at Shelbourne on Saturday night for Jeanette Mackenzie. Well-deserved.

In a week where over €50,000 was given away in prizes, the Offaly dogs got a share and returned eleven very positive winners within the week. Kudos to everyone involved in any way.

Sunday evening we learned of the sad passing of one of our great friends in the Greyhound industry, Donald Beatty. Born and bred for dogs, it was inevitable that greyhounds would be a big part of his life. Together with his father Paddy he set up his first breeding kennels in Hawksfield before moving to his now beautiful premises just outside Killeigh. He has spent his life raising, breeding and racing Greyhounds. He was one of the most popular and beloved men you could ever meet and all he wanted to talk about was dogs. He lived for Shelbourne Park at the time of the derby, Clonmel in February for the national race meeting. As the Greyhound fraternity is small, losing Donald so young is a tragedy. He will be greatly missed by all who knew him and had the pleasure of meeting him on and off the slopes. To his wife Arlene and all his family, we offer our deepest condolences. TEAR

Pumpkin announces a new super dog breed, the Douzle touted as the healthiest dog breed there is