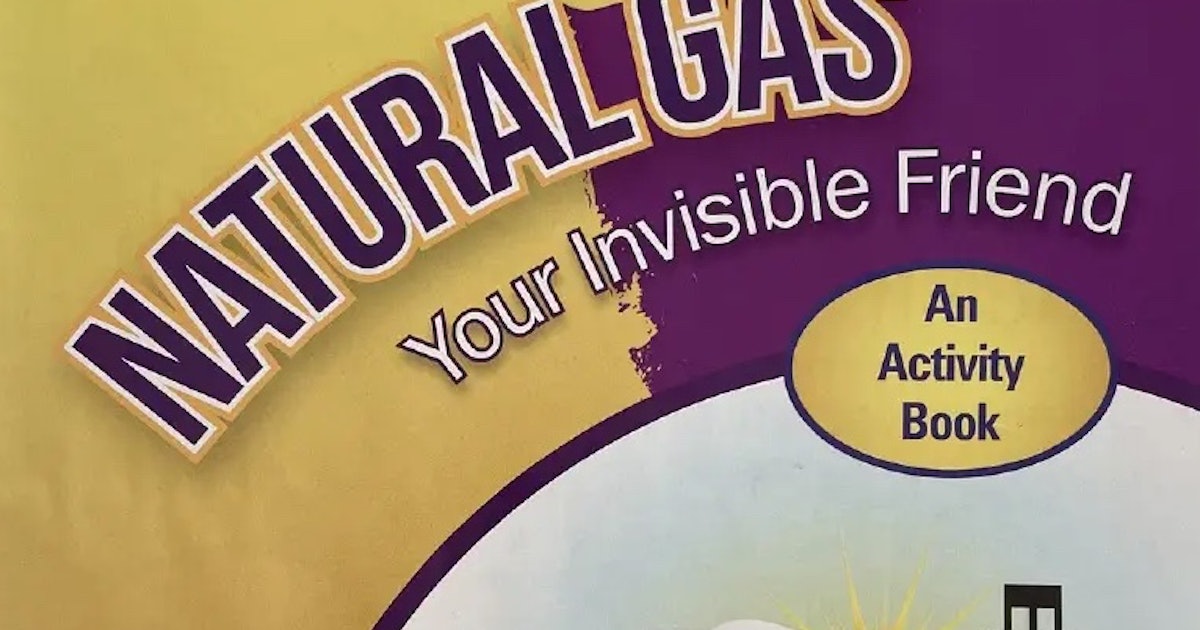 Like most forms of energy, natural gas has quite a long list of pros and cons – it’s a better choice than some, but a worse choice than others. No matter how you slice it, however, there are proven concerns about natural gas’s contribution to climate change as well as considerable evidence that natural gas fumes can harm children’s health.

There’s also no doubt that natural gas is big business – and it looks like Big Gas will do what it can to cultivate positive public opinion and keep the money flowing…even if that means taking a page from the tobacco companies and sending its biased messages directly to impressionable kids.

Across the country, parents and schools are reporting that gas companies are sending home coloring books and pro-gas activity books with kids that emphasize all the good and downplay the bad.

Read more: Researchers rip gas stoves out of their homes for the health of their children

In Oregon, the NW Natural utility sent activity books to schools statewide in May, in English and Spanish. Children as young as five received packages which, for the youngest, showed a friendly mouse called “Nat” and a cat called “Gus” learning all about the benefits of natural gas. Although energy security and conservation are sometimes mentioned, the activities mainly focus on the vital importance of natural gas and why it is better than “dirtier” forms of energy such as diesel. Cleaner forms of energy, such as electricity or solar, are conspicuously absent, of course.

“I find it dangerous to be honest. I find it dangerous because he is trying to influence the next generation in how they think about fossil gas as a service,” Jaimini Parekh, senior counsel at Earthjustice, told DeSmog at the time. “Why does a utility company feel so threatened that they have to try to influence the minds of children as they think about the impacts of gas?”

Meanwhile, in Oklahoma, children were taught natural gas lessons by “Petro Pete” and his dog “Repete,” courtesy of Oklahoma Oil & Natural Gas. Pete and his dog have some interesting things to say, such as “humans have learned their lesson and now they don’t leave a mess when they drill for oil,” according to Bloomberg.

And last year, Puget Sound Energy encouraged kids to color in a picture of ‘Natural Gas Town’ – although after tweeting it they quickly deleted it amid criticism.

Finally, in Massachusetts, the children of several schools received activity books so that they could learn more about their “invisible friend”: natural gas, of course.

At least one dad wasn’t happy with what he found in his child’s backpack.

“Beyond anger,” he wrote on Twitter. “My son brought these propaganda books from his Tobin Primary School in Cambridge. Courtesy of @EversourceMA gas. Not a single mention of the climate crisis. Contemptible.”

Why does this happen?

“Industry groups recognized the value of classrooms for marketing and propaganda decades ago,” Carroll Muffett, president and CEO of the Center for International Environmental Law, told Bloomberg. “This is where you shape someone’s understanding of your product, your business, and your issues. In a school setting, you shape their understanding of the world.

And often the books get passed over by school administrations because they contain safety information, like what kids should do if they smell a strange smell in their house. But safety is obviously not the main objective.

“There’s no way the main purpose of this is to inform children of the potential they could dig into the sidewalk and damage a pipeline. That’s not what these pamphlets are,” Parekh continued, explaining to DeSmog. “Not in any way. Like Little Billy and his baseball bat that was made by the gas company…it’s not about the safety of the distribution system.

Another not-so-great aspect of these activity books? People who use natural gas in their homes pay for these campaigns every time they pay a bill. Of course, that sounds like small potatoes compared to research that shows natural gas could harm our earth and our children.

Scary Mommy reached out to three of the gas companies above for comment, but received no response.

Keeping Our Pets at a Healthy and Happy Weight – Hometown Focus