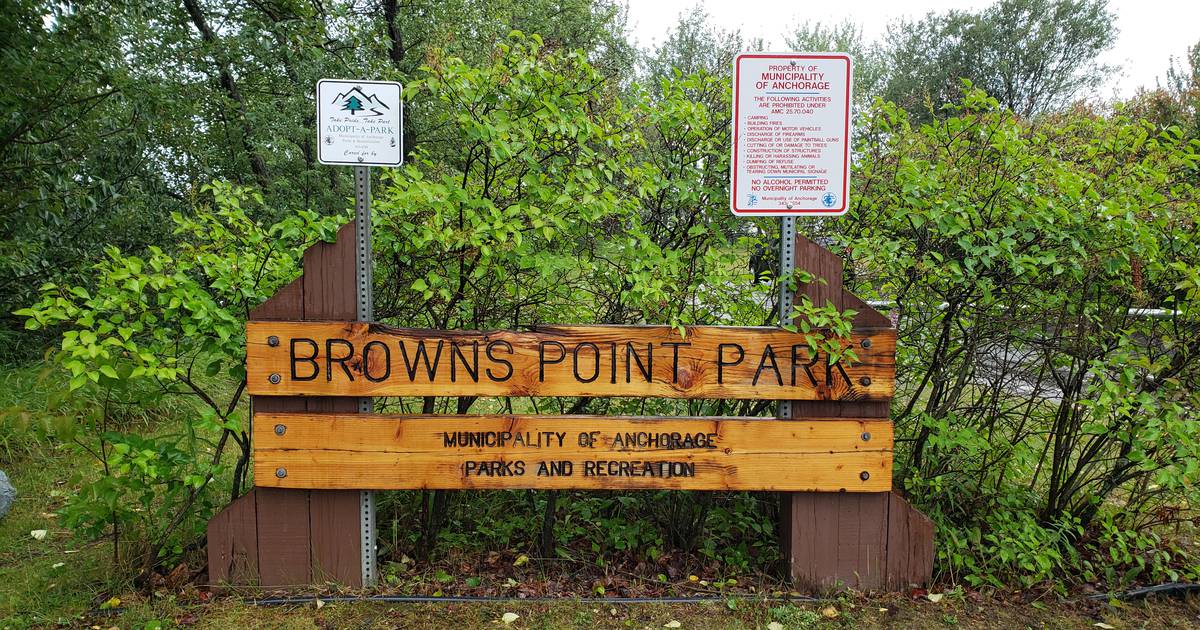 From a fierce local advocate to the over-the-top hero of the serum run, some popular parks in Anchorage have been named

part of a sequel weekly series on Alaskan history by local historian David Reamer. Have a question about Anchorage or Alaskan history or an idea for a future article? Go to the form at the bottom of this story.

Every park in Anchorage, all 223, was named for a reason. Most have been named for admirable reasons, to commemorate notable residents or to reflect the surroundings. Then there’s Balto Seppala Park, which would have upset its namesake – Seppala, not the dog. A few weeks ago I offered the backstory to several local parks and now the subject continues. Again, there are far too many parks to cover in an article or two. If your favorite park isn’t listed here, rest assured it will be featured in the future.

Brown’s Point Park is on the southwest corner of Anchorage’s Government Hill neighborhood, on the edge of the bluff. Visitors can peek through the trees from the park and see the Knik Arm, harbor, train stations, and downtown Anchorage. Because of its panoramic views, the immediate area was a residential and tourist destination long before it became an official park in the late 1950s. The park’s “totem pole” is a former telephone pole carved by a local Boy Scout troop.

In 1959 it was named Brown’s Point Park after longtime residents Jack and Nellie Brown. The Browns married in Cordova in 1912 and quickly moved to the mouth of Ship Creek. The following year they built a cabin on the Creek Flats. When the Alaska Engineering Commission arrived to build the Alaska Railroad in 1915, the Browns lost their prime creek location, but soon claimed a homestead on Green Lake just north of town. After proving themselves, they moved back to the city but kept the homestead during World War II when the army claimed the land. The Browns received $2,500 in compensation. Nellie said: “They were worth more but we wanted to do our part. Also, we believed that after the war was over, we could buy back our land. However, that never became possible.”

Jack worked for the railroad and Nellie did a bit of everything, including running a diner for a while. They were local celebrities, friends of all the important people and a constant source of quotations for any curious visitor or journalist. So the park was named in their honor while they were still alive, a rare achievement. Jack died in 1972 and Nellie followed him in 1978.

At the end of the tiny street into the tiny park is a stone memorial to Stuart “Stu” Hall (1935-2005). A longtime Government Hill activist, the attorney and former state ombudsman has worked tirelessly to support and improve his community, even to the very end. By the time he was 70, he had sent at least 30 emails about neighborhood issues in his last week.

As the memorial notes, Hall “has walked this path many times with dog Pal at his side.” A sidewalk was installed with the footprints of a man and a dog embedded. Today you can follow these steps just as Stu and Pal have done so many times before.

Longtime residents may remember when Dave Rose Park to the east of Anchorage was called Conifer Park. First developed as Conifer Park in the 1980s, the park was reopened in 2006 in honor of Rose (1937-2006), former member of the Anchorage Parks and Recreation Commission, City Council, Borough Assembly and Municipal Assembly, among many other citizens, renamed organizations. He was also the first Executive Director of the Permanent Fund.

Ruth Arcand Park, with an entrance on Abbott Road between Lake Otis Parkway and Elmore Road, was named for Ruth Henry Arcand (1918-1997) on July 23, 1985. As Mayor Tony Knowles wrote in a memorandum to the assembly, “If it weren’t for their individual work and influence on clubs and organizations, this park would not be available to the people of Anchorage.”

Arcand moved to Anchorage in 1947 and married in 1953. That year her husband George urged her to advocate for a park near their homestead. He often reminded her to save a park, but the time never seemed right. A park never seemed like a pressing issue until she saw an article about nearby land up for auction. This land, which became Ruth Arcand Park, was then state land known as Section 16 and earmarked for private development. She immediately began her campaign to preserve the land as a park.

She wrote letters, spoke at countless meetings, gave tours, drummed for community support, steered organizations at her whim, formed coalitions, and cajoled every legislator within reach. In 1971 she told the Anchorage Daily Times, “This is one of the finest pieces of land left in the Anchorage area. It has all of the natural vegetation and ground cover native to the area and should be preserved.

In 1983 their efforts were rewarded and the property was set aside for a park. Many others had fought in the same crusade over the years, but none could say they had worked harder or longer than Arcand. And so in 1985, to her dismay, the new park was named after her. She told the Times: “I’ll be embarrassed to see my name on the sign. Just saving the country is reward enough. But it’s an honor.”

Land for Tikishla Park north of Chester Creek in Airport Heights was acquired in the 1970s as a partnership between local residents and the city. Development began in 1983 and the first playground was inaugurated in 1985. “Tikishla” is a garbled version of Upper Cook Inlet Dena’ina “ghedishla” meaning black bear.

Michael J Shibe Park, south of Raspberry Road and east of Jewel Lake Road, was originally named Gladys Wood Park after former teacher and principal Gladys Wood (1916-1970). She moved to Anchorage in 1950 and began teaching at Denali Elementary that year. Shibe (1956-2005), a longtime community volunteer, died in a tragic accident at the 2005 National Boy Scout Jamboree. On January 24, 2006, the Anchorage Assembly voted to rename the park Shibe. Because the nearby school was still named after her, Wood’s family had no objection to the new park name.

Then there’s Balto Seppala Park, nestled between Wisconsin Street and Milky Way Drive. It was named in 1981 and developed in the mid-1980s. All good Alaskans know that the name refers to the legendary dog ​​and its owner, musher Leonhard Seppala. By the time the park was founded, Seppala had been dead for over a decade, but its lack of involvement is evident from the name alone.

Seppala was already a well-known sled dog racer and breeder when Nome was hit by a severe diphtheria epidemic in 1925. While adults are susceptible, children are at greatest risk of infection, and the city’s only doctor had run out of necessary serum. Isolated as Nome was by geography and winter, residents faced the ugly possibility of watching their children suffocate while infected tissue swelled and blocked their airways.

Dog sleds were the only viable method of long-distance transportation left. And Seppala left at once for Nenana, where a shipment of serum awaited him. His favorite and trust dog Togo was on a leash. Seppala planned to ride the entire route himself, but after his departure a squadron was built that eventually included 20 riders and about 150 dogs. Still, Seppala, Togo and the rest of the dog team rode the longest and most dangerous leg of the relay.

But of Balto, Seppala and Togo, Balto is the best-known name today. Seppala bred, named, raised and trained Balto but did not race with him. He also didn’t pick Balto for his serum run team. Balto was among the leftover dogs used by musher Gunner Kaasen on the final leg of the serum run. When Kaasen entered Nome, Balto was in the lead and thus received an outsized share of the voyage’s credit.

This result did not sit well with Seppala. In his 1930 memoirs, he described Balto only as a “scrubber dog.” He toned down his criticism by noting, “I hope I’ll never be the man to take credit for any dog ​​or driver that’s entered this race.”

To be clear, Balto was a very good boy, but he wasn’t a Togo. Just as Seppala favored and cherished Togo during the latter’s lifetime, he would also have preferred a park name that associated him with his beloved canine, not one of his outcasts. As he said of the Balto statue in New York’s Central Park in his memoir, “I resented Balto’s statue because if any dog ​​deserved special mention, it was Togo.” Balto Seppala Parks annoyed.

Meet an author, adopt a furry friend and check out other events in Grapevine,…

Woods Humane Society in San Luis Obispo Matches All Donations up to $10,000 During…