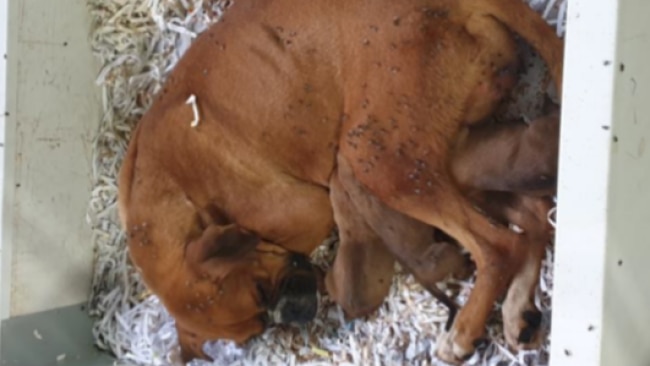 A father and daughter who ran a large puppy farm in northern New South Wales have been hit with hefty fines after hundreds of dogs were found in horrific conditions.

Warning: This report contains words and images that may offend some readers.

A father and daughter duo who ran a large dog farm have been found guilty of animal cruelty after hundreds of dogs were found two years ago in horrific conditions.

The RSPCA’s Intensive Animal Husbandry Task Force discovered 441 dogs – including 250 puppies – being held in inhumane conditions at a property in Copeton near Inverell in northern New South Wales and a property linked to Wagga Wagga in September 2020.

The dogs were found in concrete kennel blocks with no litter and wet floors.

Each dog had wet feet and stomachs and some were covered in liquid feces.

An investigation into the puppy farm by the RSPCA NSW Intensive Animal Husbandry Task Force has been launched after a pregnant boxer named Strawberry died of obstructed labor after failing to receive veterinary treatment.

Dystocia is difficulty expelling a litter of puppies through the birth canal during labor.

The couple pleaded guilty and were found guilty of a total of eighteen offences.

At sentencing, Magistrate Kemp sitting at Inverell Local Court said Strawberry was “naturally vulnerable, utterly helpless and dependent on humans to ensure the right treatment was offered to her”.

“There was a failure on the part of the defendant, as a result of which she endured hours of suffering until her death.”

If you have animal welfare concerns, please call the RSPCA to investigate 1300 CRUELTY.