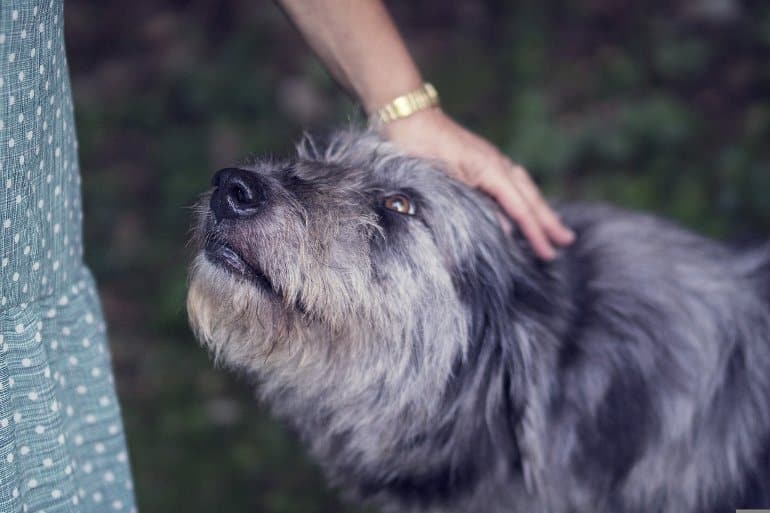 Summary: The ability of dogs to “sniff out” certain diseases, including COVID-19 infection and cancer, has been well documented in recent years. Now, a new study reveals that dogs can detect a person’s stress level by smell alone.

Dogs have a long history alongside humans, which gives them an incredible ability to read human signals. Dogs also possess an incredible sense of smell, which allows them to detect diseases, such as COVID and lung cancer, in humans based on smell alone.

Whether dogs’ abilities extend to the detection of odors associated with psychological states has been much less explored.

When people are stressed, there are hormonal and nervous system changes that alter the types of smells produced by the body. My colleagues and I wanted to know if dogs could distinguish between scent samples taken from the same person before and after being stressed. To do this, we took ideas from the field of biomedical detector dogs (sniffer dogs in the laboratory) and combined these ideas with techniques used to test dogs’ perception of smells.

Our results are published in the journal PLOS One.

To test whether dogs could detect an odor associated with psychological stress, we attached sensors to study participants to continuously measure their heart rate and blood pressure. Participants also rated how stressed they felt before and after participating in the task.

Prior to the start of the task, participants wiped gauze on the back of their necks, placed it in a sterile glass vial, and exhaled into the vial. We then asked participants to complete a quick mental math task to stress them out.

After the task, participants provided another stress rating and two additional sweat/breath samples.

The total time between collection of relaxed (pre-task) and stressed (post-task) samples was four minutes, reducing the likelihood of participants experiencing changes other than the onset of stress.

We only included samples in the study if the person said they found the task stressful and their heart rate and blood pressure increased during the task. We presented samples from 36 people to the dogs.

The dogs included in this study were companion animals, volunteered by their owners, who were trained using positive reinforcement by researchers in a lab once a week. Before formal data collection began, dogs were taught to communicate that they collected a sample by standing and freezing over it for several seconds or sitting in front of it – we called this their “driving behavior”. ‘alert”.

The dogs were then taught a matching game, where they learned to distinguish between samples with known odor differences. Once it was established that the dogs had passed, they were ready to be tested.

During the tests, we asked the dogs to distinguish between samples from a person taken before and after the arithmetic task. To teach the dogs what scent they should look for in each testing session, they were first shown the person’s stress sweat/breath sample alongside two “control samples” – clean gauze in glass vials without sweat or breath.

Dogs were allowed to sniff all three samples and were rewarded for alerting researchers to the sweat/breath sample.

After ten exposures, a second breath/sweat sample was added to the list: the relaxed sample from the same person. Here began the discrimination test, which took place over the next 20 trials. It was the dogs job to communicate, through their alert behavior, which sample they perceived to be the same as the one they had been shown in the previous ten trials, i.e. which sample smelled like the sample of stress. Because dogs can use other information to help them make a choice, we’ve included visual and olfactory controls.

If these two scents smell the same to the dog, you would expect him to choose one or the other by chance. If the two odors smell different, they would be able to consistently find the odor presented to them first: the stress odor. Each set of participants’ samples was only used once, so the dogs saw samples from a different person in each session.

From the first time the dogs were exposed to these samples, they perceived the samples to smell different. The dogs correctly selected the stress sample in 94% of the 720 trials, showing that the participants’ psychological experience of the arithmetic task had caused their bodies to emit odors in their breath and sweat that dogs could detect.

It should be noted that this study does not determine whether the dogs perceived the stress samples as reflecting a negative emotional state. It’s likely that in a real environment, dogs use a variety of contextual cues, such as our body language, tone of voice, or breathing rate, to help them understand a situation. However, the results provide strong evidence that odor is also a component that dogs can pick up.

Establishing that dogs can detect an odor associated with human stress provides deeper insight into the human-dog relationship and adds to our understanding of how dogs perceive and interact with human psychological states. This knowledge could also be useful for training anxiety and PTSD service dogs who are currently trained to respond primarily to visual cues.

About this stress research news

Previous research suggests that dogs can detect when humans are stressed. This study tested whether baseline and stress odors could be distinguished for dogs, using a double-blind, two-phase, three-alternative forced-choice procedure.

Combined breath and sweat samples were obtained from participants at baseline and after a stress-inducing task (mental arithmetic). Participants’ stress was validated by self-reports and physiological measurements recorded via a Biopac MP150 system. Thirty-six participant samples were presented to four dogs over 36 sessions (16, 11, 7, and 2 sessions, respectively).

Each session included 10 phase 1 training trials and 20 phase 2 discrimination trials. In the first phase, the dog was given a participant’s stress sample (taken immediately after the task) alongside two blanks ( the sample materials without breath or sweat), and had to identify the stress sample with alert behavior.

In phase two, the dog received the stress sample, the reference sample from the same participant (taken before the task), and a blank. On which sample (blank, baseline or stress) the dog performed its alert behavior was measured. If the dogs can correctly alert on the stress sample in phase two (when the reference sample was present), this suggests that the reference and stress odors are distinguishable. Performance ranged from 90.00% to 96.88% accuracy with a combined accuracy of 93.75% (N trials = 720).

A binomial test (where the probability of success of a single trial was 0.33 and the alpha was 0.05) showed that the proportion of correct trials was greater than expected by chance (p

These findings add to our understanding of human-dog relationships and may have applications for emotional support and post-traumatic stress disorder (PTSD) dogs.

Mrs. Oktoberfest contributes to the community in many ways throughout the year