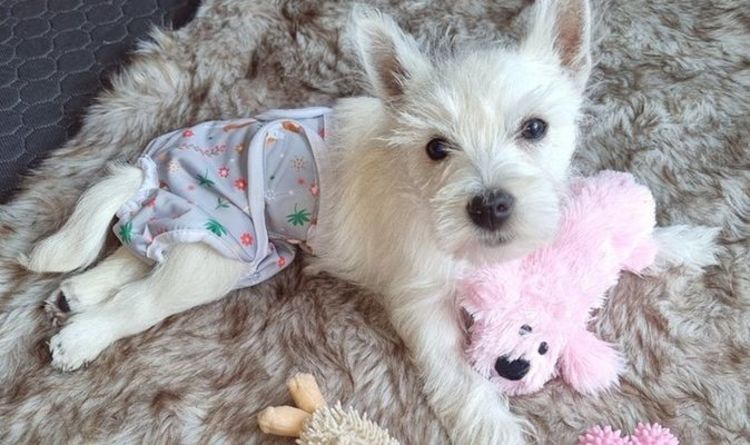 Tammie Fox adopted her puppy, Pumpkin, when she was 8 weeks old. When she noticed that the puppy was having trouble walking, she took her to the vet who revealed that the puppy’s spine and paws were broken. As a result, Pumpkin is now completely paralyzed from the waist up.

Mrs. Fox’s petition calls for the pumpkin farmer to be investigated by the RSPCA, as well as stricter laws for raising animals.

She is also calling for tougher penalties for animal cruelty and neglect.

Telling Pumpkin’s story on the petition’s website, Change.org, she wrote, â€œI adopted Pumpkin when I was 8 weeks old.

â€œShe had been turned over to a local rescue.

“Pumpkin was having trouble walking.

â€œAfter his scans at a specialist veterinary clinic, Pumpkin’s injuries were shocking and disturbing.

â€œShe had received injuries from extreme trauma as a newborn puppy.

“His spine was broken, as were his legs.

She wrote: ‘Puppy mills are responsible for half of the animal welfare problems in the UK:

â€œPoor little female dogs are made to produce litter after litter until they’re exhausted;

â€œThe puppies are not cared for properly and even mistreated, as happened to Pumpkin;

â€œThey are often not properly inoculated and in poor health; hereditary defects (eg epilepsy, eczema) are not eliminated but allowed to continue into the next generation;

“We don’t take enough precautions to make sure the puppies go to good homes.”

She added: “If the government claims that it cannot afford to inspect the breeding establishments, it should delegate the task.

the petition, which started two months ago, currently has 62,864 signatures.