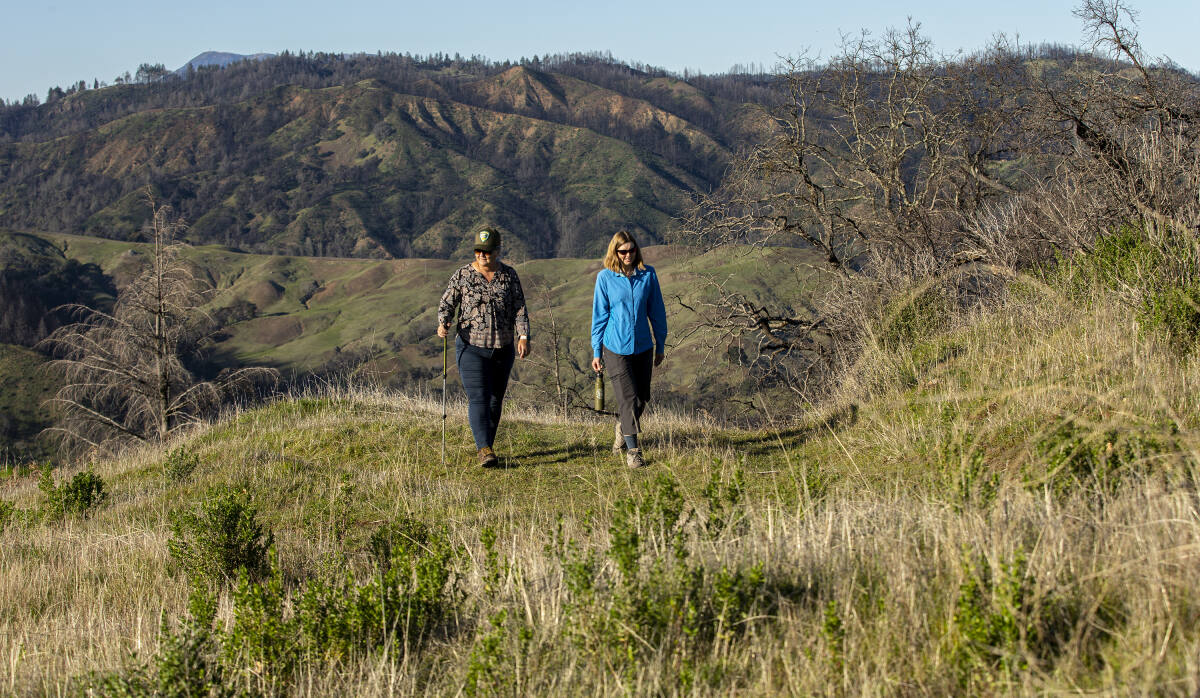 Overlooking Sonoma County’s valleys and mountains—even a sliver of ocean—an admired property called Cougar Landing on the east ridge of Hood Mountain has seen and been through a lot.

Once an illegal marijuana cultivation facility, the property has been virtually emptied by devastating wildfires over the past five years. Though the peak can be seen from at least five different regional and state parks, as well as Highway 12, the only large mammals seen up close were roving mountain lions — the property’s eponymous cougars — as well as bobcats and coyotes and black bears.

The 120 acres will open to the public as early as this summer as the latest addition to the county’s growing network of parklands and open spaces. Sonoma County Regional Parks completed the $1.02 million purchase of the property in late January and expanded Hood Mountain Regional Park westward.

Park officials have long eyed the land as a key piece of the adjacent natural habitat 2,000-acre wilderness park towers over the Sonoma Valley in the Mayacamas Mountains.

“You were always kind of looking over at that hill that we’re going to, and we’d always look over there and be like, ‘Huh, I bet the view is really spectacular,'” Whitaker said Tuesday while touring the property.

“However, the prospect of it wasn’t, and that’s another part of the story.”

Past Life: Weed, Crime and Art

Remnants of the town’s past are everywhere.

Broken glass, bits of burnt plant pots, piles of reeds, and rusted chunks of metal are scattered haphazardly in the red, shallow earth.

Two years ago, the Glass Fire swept across the valley and mountain, scorching the remains of a notorious illegal marijuana growing site on the property. A previous fire had already destroyed RVs, potted plants, and dome-like structures on the site.

“The fire took a lot of the work off us,” said Sarah Phelps, regional parks marketing specialist.

“Dogs barking, barbed wire, cameras – it wasn’t a really cozy (place). It was like, ‘I shouldn’t go there,'” Whitaker said. “It was a disaster.”

The land was sold to Regional Parks by Ex Deo Libertas, LLC, whose owners are listed as John Orgon, a former real estate developer, and Kirsha Kaechele, an arts curator who founded the nonprofit organization Foundation Life is Art.

In 2010, the property was registered with two nonprofit organizations, American Medicinals and the Life Is Art Foundation.

Kaechele told the Press Democrat in 2010 that American Medicinals was growing cannabis for patients who belonged to their cooperative. The proceeds are intended to support the art foundation and provide artists with a workspace.

But neighbors filed complaints about the growing number of barking dogs, unfamiliar visitors, heavy traffic and large generators as questions about the legality of the operation surfaced.

“There was a two-story thing that looked scary, even scarier when you walked in,” said Karen Davis-Brown, regional parks planner.

“The property was only used for cultivation and workers lived on it,” Davis-Brown said. “I remember hiking the Lawson Trail, hearing the dogs barking, and running back to my car.”

Ben Neuman, retired building and code enforcement manager for the district planning department, chuckled as he recalled the property at the end of Cougar Lane, off the steep and winding Los Alamos Road.

“It was one of the few properties that we received an inspection order for,” Neuman said. “It was a rarity back then because growing marijuana was illegal and it was in such a remote, quiet area.”

Officials from the Sonoma County Sheriff’s Office eventually intervened, confiscating the crop and shutting down a barn where the pot was being cleaned, dried, and sorted.

The nuns’ fire in 2017 claimed the barn and the jar fire in 2020 was a key factor in the previous owner’s decision to sell the land, regional parks officials said.

Puppy mill operator has yet to pay $60,000 in state fines | national news