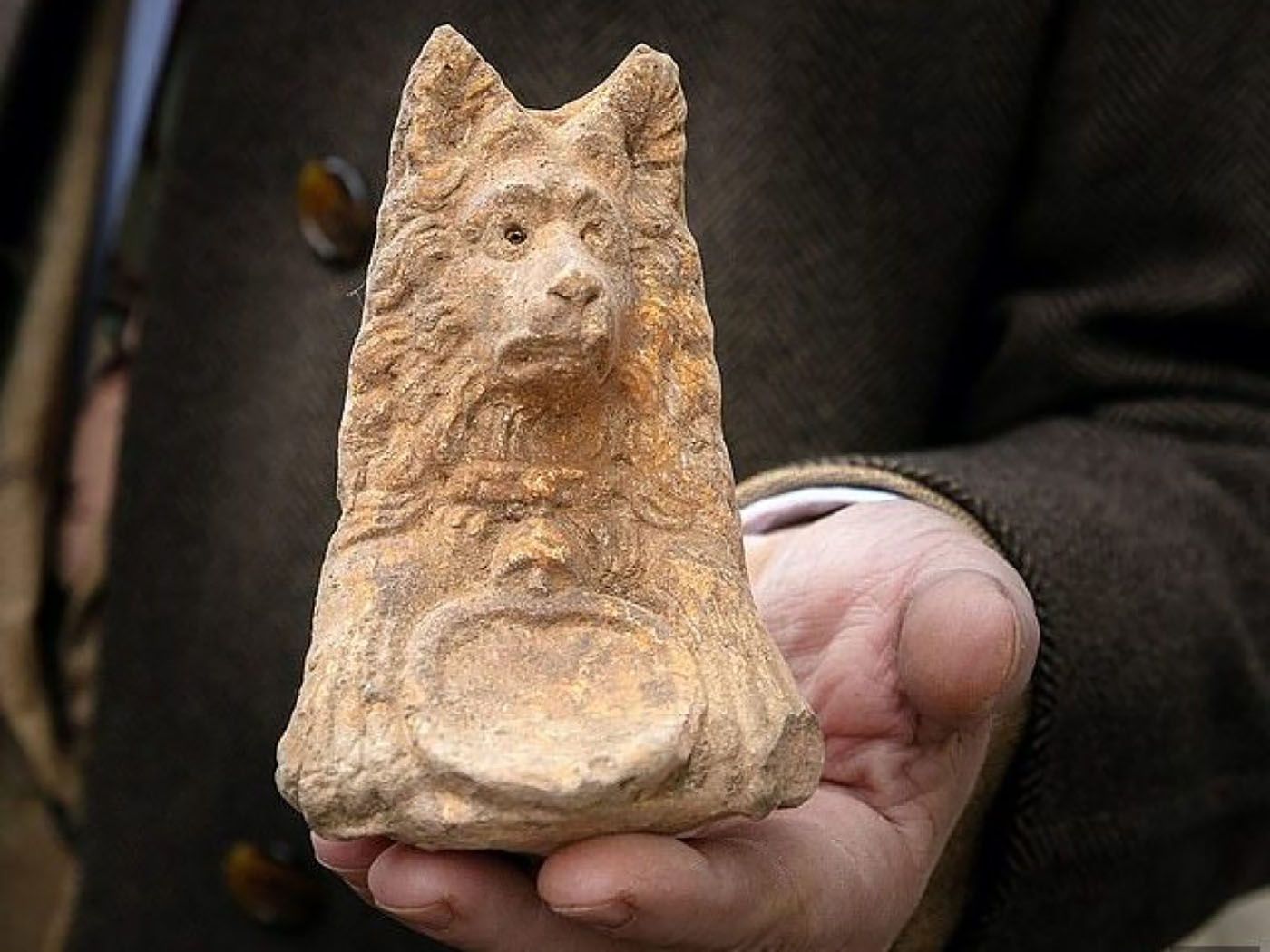 Archaeologists excavating an ancient burial complex under the Via Latina, one of the oldest streets in Rome, have unearthed a terracotta statue of a dog, three graves and an intact funeral urn, reports Rome today. City workers discovered the site, which dates between the first century BCE and the first century CE, while laying water pipes in the Appio Latino neighborhood.

â€œOnce again, Rome shows important traces of the past throughout its urban fabric,â€ says Daniela Porro, head of the Special Superintendence of Archeology, Fine Arts and Landscape in Rome, in a declaration, from a translation by London Time‘Philippe Willan.

In ancient times, some terracotta statues were part of the drainage system used on sloping roofs, containing chiseled holes that let water through, notes Alex Greenberger for ARTnews. The clay used to make the newly discovered dog’s head is similar to the fired ceramic found in centuries-old gutters and pipes in the area. But this particular figure does not have any holes in it, which means it was probably created as a decorative accessory or gift.

Construction workers contacted authorities after discovering artifacts while digging about a foot and a half below street level. Archaeologists brought in to investigate found three tombs built on a concrete base. One was made of hardened volcanic ash, while another featured a mesh-like pattern on its walls, Nathan Falde reports for Ancient origins. The third tomb showed signs of fire damage along its base.

Beside the graves, the team discovered the remains of a young man buried directly in “bare earth”, as well as an urn containing bone fragments, writes Ian Randall for the Daily mail.

By Rebecca Ann Hughes from Forbes, experts say the site was compromised by underground utility works completed before Rome enforced laws to protect its ancient heritage.

Built over 2000 years ago, the Via Latina stretched some 124 miles southeast of Rome to the city of Capua, according to the Daily mail. The artery began to what later became Porta Latina, a gate that was part of the Roman defensive walls built by Emperor Marcus Aurelius between 271 and 275 CE

Although the graves are an important find, the well-preserved dog-headed statue dominated the coverage of the finds. The palm-sized work of art shows a dog with pointy ears wearing what appears to be a collar with an emblem and clutching a small object between its paws.

It is not known exactly what type of dog the statue represents.

“It could be representative of a large breed or a small toy breed,” said a spokesperson for the Royal Society for the Prevention of Cruelty to Animals tell the Daily mail.

The representative points out that dog breeds have changed dramatically over the past two millennia, adding: â€œDuring the Roman period, there was a selective breeding of dogs for desirable qualities and for specific functions, such as hunting, hunting. guard â€and the company.

According to Ancient origins, a popular dog breed in ancient Rome was the great Molossian dog, which was originally imported from ancient Greece. Now extinct, the dog is considered the foundation of the modern mastiff. Other breeds seen throughout the Roman Empire included the ancestors of Irish Greyhounds, Greyhounds and Lurchers.

Working group formed to define the baseline for odors

How a book started this adventure