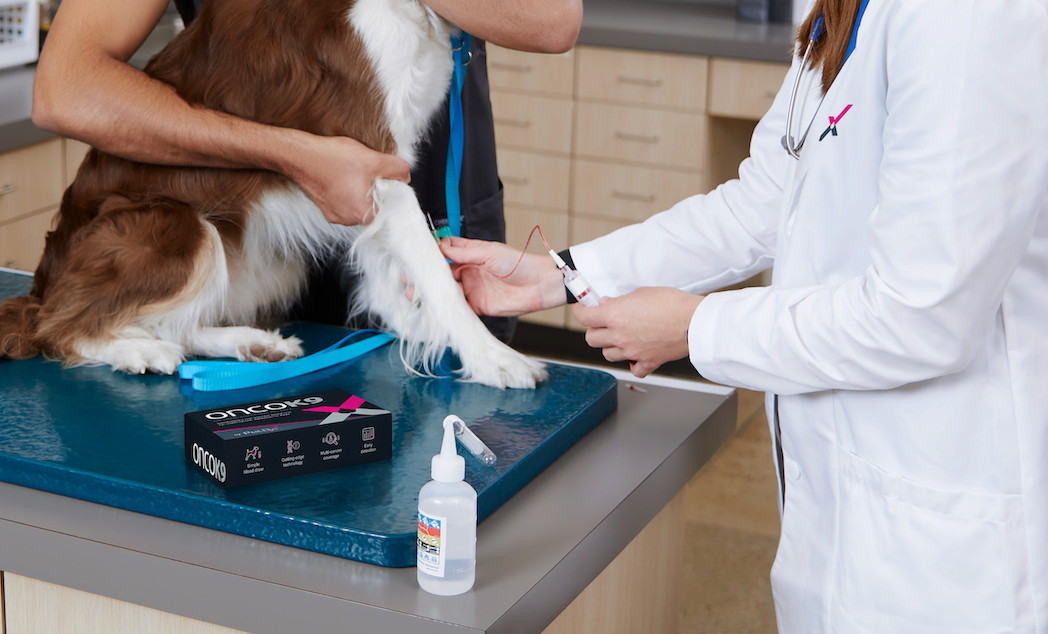 The CANcer Detection in Dogs (CANDiD) study demonstrates the performance of the novel OncoK9 liquid biopsy and sets a new benchmark for veterinary medicine.

A clinical validation study demonstrating the ability of a new liquid biopsy test for dogs (OncoK9; PetDX) to detect multiple cancers in dogs, using next-generation sequencing (NGS) has been published in PLOS A, a peer-reviewed, open access scientific journal from the Public Library of Science. The publication details the results of the CANcer Detection in Dogs (CANDiD) study, which is the largest clinical validation study ever conducted in veterinary cancer diagnosis, according to PetDX.1

“This historical study and our rich [research and development] pipeline in veterinary oncology, underscore our commitment to making PetDx the world leader in veterinary cancer diagnostics,” said Daniel S. Grosu, MD, MBA, Founder and CEO of PetDx, in a corporate press release.1

According to the National Cancer Institute, there are approximately 6 million new cases diagnosed each year in a population of approximately 65 million dogs in the United States.2 There are no set guidelines for screening dogs for cancer, and many cases are not diagnosed until dogs begin to show clinical signs, at which time the cancer is often advanced and the chances of recovery or long-term control are low.1

According to Andi Flory, DVM, DACVIM (Oncology), Chief Medical Officer of PetDx and lead study author, during a session presentation at Fetch dvm360® in San Diego, California in December 2021. Flory also discussed how to improve patient outcomes through early cancer identification and disease treatment with liquid biopsy tests. She noted that despite the need, cancer screening paradigms do not exist for dogs, as they do for humans.3

Annual or semi-annual physical exams and routine minimal database tests such as chemistry and urinalysis are unable to detect many cancers in dogs, Flory added during the Fetch session, but the Noninvasive liquid biopsies that focus on high-risk canine populations, including older dogs and predisposed breeds, can help identify cancer at an earlier stage.3

OncoK9 mirrors the leading multi-cancer early detection (MCED) tests for humans and relies on a blood draw to obtain a DNA sample. NGS is used to detect certain types of cancer in dogs through their DNA.1

Results from the recently published CANDiD study demonstrated the ability of OncoK9 to detect cancer-associated genomic alterations in canine patients across a large and diverse set of 30 cancer types. The study demonstrated 85.4% sensitivity for 3 of the most aggressive canine cancers: lymphoma, hemangiosarcoma and osteosarcoma – and detection was also particularly high for the 8 most common types of cancer in dogs. Study results showed that OncoK9 has an overall sensitivity of 54.7%, a specificity of 98.5% (corresponding to a false positive rate of only 1.5%) and, in some cases, the cancer was detected several months before the onset of clinical signs. .1.4

As a veterinary diagnostic tool, this type of non-invasive test may enable earlier detection of cancer in clinical screening and diagnostic aid scenarios, which could lead to a paradigm shift in how the Cancer is diagnosed and treated in dogs, according to CANDiD investigators.4

“Early detection has been shown to lead to better clinical outcomes in humans, such as increased life expectancy and higher rates of long-term cure or control following curative-intent interventions. It stands to reason that these similar benefits could be achieved in canine patients with the availability of early detection screening tools,” Flory said.3

The CANDiD study was performed on blood samples prospectively collected from more than 1,000 customer-owned dogs at more than 40 clinical sites in the United States, Canada, Brazil, Netherlands, France and in Hong Kong between 2019 and 2021.1.4

“The rate of enrollment in this study across the world was truly inspiring. Dog owners as well as veterinarians are eager to have a non-invasive cancer detection test and were happy that their dogs could be part of this research. “Having this new tool in the toolbox is incredibly exciting for veterinarians; earlier detection, when integrated as part of preventative care, can improve cancer outcomes and shorten the path to diagnosis in clinically difficult cases,” Flory said in a press release from the organization.1

At PetCure Oncology in Jacksonville, Florida, the study’s first clinical site, 88 dogs enrolled in the study.1

“My own dogs, Buccee and Bella, were the very first enrolled at our hospital, and they are proud to have contributed to such a monumental effort to help dogs with cancer,” said Tracy LaDue, DVM, DACVIM ( oncology), DACVR (Radiation Oncology), physician and radiation oncologist at PetCure Oncology, and Southeast Veterinary Oncology and Internal Medicine, Orange Park, Florida, in the press release.1

OncoK9 is currently recommended as an annual screening test for dogs at high risk for cancer due to age and/or breed, and as a diagnostic aid for dogs in which cancer is suspected based on clinical signs or other clinical findings. Given the prevalence of cancer in these canine patient populations, the positive predictive value (PPV) of the test is estimated to be 76-80% when using screening and 94-97% when using diagnostic aid. Further studies are underway to support application of the test in additional use cases, including minimal detection of residual disease, monitoring for recurrence, monitoring response to treatment, and targeted selection of the treatment.1

“Over the past decade, new genomic testing solutions using liquid biopsy technology have catalyzed paradigm shifts in multiple fields of human medicine, such as oncology, obstetrics, infectious diseases and organ transplantation. Our team is excited to bring this breakthrough innovation to veterinary medicine, starting with a solution for detecting cancer, the greatest health threat facing mankind’s best friends,” said Dana Tsui, PhD, scientific director of PetDx and lead author of the study, in the press release.1

Since its launch in 2021, the OncoK9 liquid biopsy test has been successfully incorporated into the routine testing of several hundred leading veterinary practices nationwide as a new preventive care and diagnostic aid tool. , according to PetDX. Blood samples from around the country are shipped daily to PetDx’s central laboratory in San Diego, and results are delivered to ordering veterinarians within 10 business days.1

The test is available at veterinary clinics in the United States and Canada through PetDx and IDEXX reference labs.1