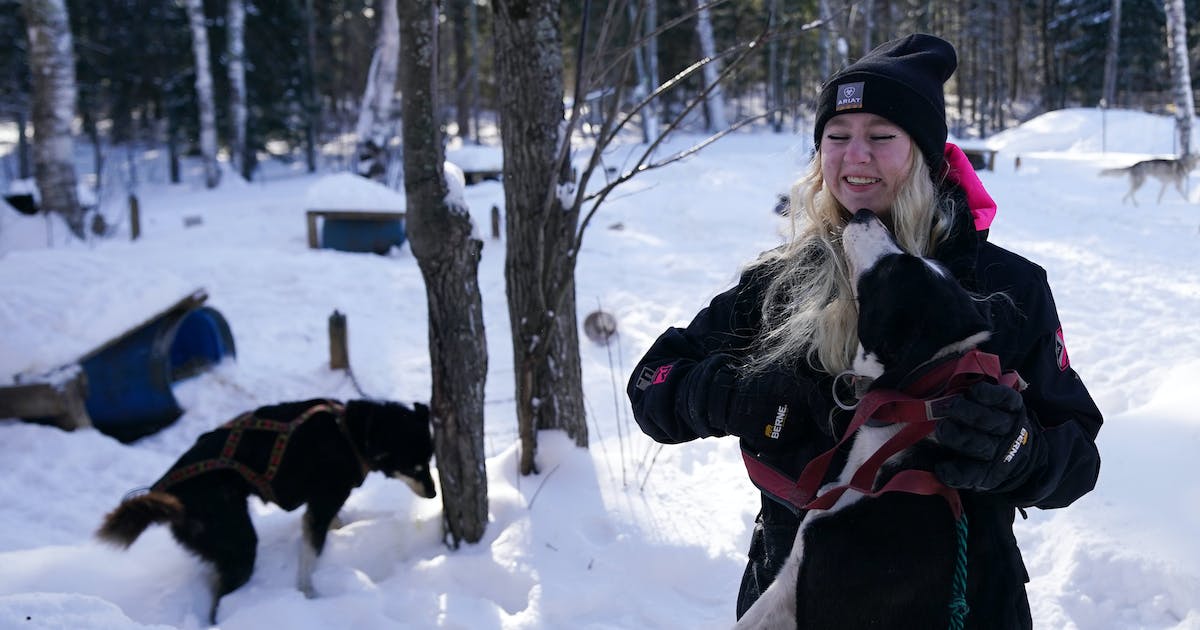 BRITT, Minnesota – Elena Morgan was 4 years old when she started tying it up border collie to a sled using a series of complicated knots. Sometimes the family pet could pull her up to a mile.

This was his introduction to sled dog racing – just a do-it-yourself rig and an early taste for adventure. There was no family connection to the sport, and she had yet to see the signature sled dog movie “Iron Will” a dozen times.

“I don’t know how I was inspired,” Morgan, 17, said on a recent -4-degree day from her home in rural Minnesota, about 10 miles north of Virginia and side of the Upper National Forest.

A decade later, she has DIYed an 18-dog kennel which she keeps in a large, fenced-in enclosure on the family’s 3 acres of land. Many of them are throwbacks from mushers she met while sailing in a sport in which, in many cases, competitors were born.

Elena Morgan is one of 17 mushers who will take part in a 40-mile race which is part of the events surrounding the John Beargrease Sled-Dog Marathon which begins on Sunday.

Morgan’s race, the Beargrease 40, is sometimes a gateway for young mushers. She expects it to take three to four hours to get to the endpoint in Two Harbors, Minn.

“Everything she did, she did it alone”

According to family tradition, Morgan found her first dog – a birthday present from her father – on Craigslist and convinced the owner to cut several hundred dollars off the asking price. When she did something similar to get her second dog, she said the seller was surprised to find he had cartwheeled and cared for a 12-year-old child.

“Everything she did, she did on her own,” said her grandfather, Tim Morgan.

Over the past few years, Elena Morgan has built a kennel, which is partly supported by a handful of sponsors, her job as a waiter at Kunnari’s Farm Market in Virginia, and herding dogs. She networked with seasoned competitors and twice participated in Mushing Boot Camp – summer sessions led by Jamie Nelson, four-time Beargrease Sled Dog Marathon champion, from Togo, Minn.

And she learned hard lessons.

After a cold snap three years ago, it has warmed to -15 below zero. She was eager to spend time with the dogs, so she hitched four of them to her sled. Before she even reached the trail, she hit a piece of ice, was thrown from her sled and hit her head. When Morgan recovered, the dogs – and the sled – were gone.

“I was really worried,” she said. “They are my best friends. It was scary to think that I had lost them.”

She posted a message on Facebook and soon after two of the dogs were found. A few days later, she was contacted by someone who heard howling in the woods and feared the wolves would find her lost team before her.

Morgan thought maybe has been his team.

“If you’ve had huskies, you know they sound like wolves when they howl,” she said.

With the help of friendly snowmobilers, she and her brother found the other two dogs – one still tied to the sled and tangled in a tree.

This incident stuck with her and these days she doesn’t go out when it’s extremely cold and she has trained the dogs to always come home at the end of a run.

Carmen Morgan, 10, described her sister as someone who can handle anything.

“She knows how to understand situations,” she said.

Take care of a full kennel

Morgan’s days revolve around dogs: until 40 pounds of food per day, between daily feedings, waste pick-up, training runs and check-ins with each dog. If they’ve been exercising, she rubs their joints. Some of these dogs are older, with arthritis on the horizon, she suspects.

Sport is expensive, she says, and takes time. The Morgan family doesn’t make as many trips in their RV anymore.

It’s worth it, she said.

While sled dog racing was not a family sport in the past, it has now taken root. His twin brother, Matt, is the mechanical-minded dog handler, though he has no interest in competing. Her sister, Carmen, helps look after the dogs and also competes. Last weekend, she finished sixth at the Cub Run, a Beargrease event for young mushers. Her father drives her to events and accompanies her to sled dog training camp.

When Elena Morgan is in the woods with just the dogs, she’s happy, she says. She loves the cold, the quiet interrupted only by the sound of the chains, the puffs of dog’s breath while they exercise.

“I usually talk to the dogs about my day, which is a little weird, I guess,” Morgan said. “They’re not responding, but it’s working. I also admire how pretty it is there.”

“Yeah, that’s what I really love about it,” her little sister added dreamily, “how pretty it is in the woods.”

Elena Morgan has found that the forest trails and snowmobile trails of the Upper National Forest are great for practice runs with her team. But during last year’s race, she realized she had done all her training on flat ground. The dogs were taking the hills too fast which eventually made them tired.

This year, after a lot of training with a mountain bike, they are ready, she says.

Collectively, she has a team that is ready to work.

“They are such fun dogs to be around,” she said. “They have such positive attitudes.”

Morgan’s lead dog is Shypoke, who shows an impressive vertical when ready to go. Shypoke’s mother, Blush, is a seasoned marathon runner, and she hugged him before a recent race. Cracker is a spit, according to Morgan, and Dolly is a fireball – “a big personality for such a small dog”. His wheel dogs are Drake, who is brother to Shypoke and Eli, an 8-year-old with puppy energy.

Morgan is adamant she won’t win the Beargrease 40. Other racers have more experience and their own line of dogs, she said, rather than the mix and match team that she gathered. Most of them don’t work around a schedule that involves school.

“This year, a top ten could be possible,” Morgan said. “The plan is to have fun.”

Comments are temporarily unavailable.
We apologize for the inconvenience.