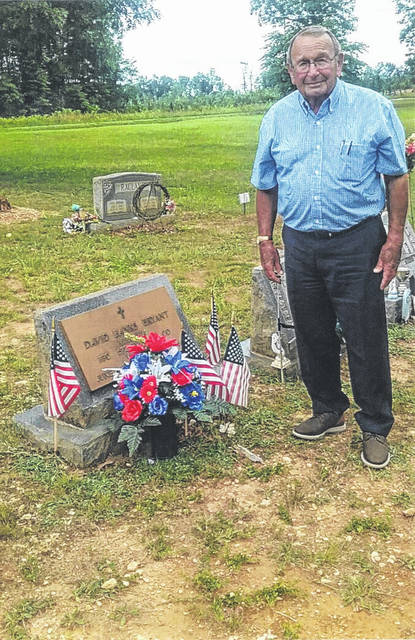 Recently, on a warm summer Sunday, a Mount Airy man finished a 33-year journey in a remote, sun-drenched cemetery in central Virginia.

And in doing so, he was reminded that the celebrations enjoyed by many across the country today, on Independence Day, have come at a terrible price for many in the country’s history.

Roger Keck’s visit to the small cemetery at Maple Grove Pentecostal Church just outside Dillwyn, Virginia was a trip he’d wanted to make since 1988. In some ways it was a trip he had taken since 1966, the first and only until now had he ever visited the city of Virginia.

The first time, in August 1966, he was a sergeant in the US Army, sent there on a sacred mission – he escorted the corpse of Pfc. David Banks Bryant, who was killed in Vietnam when he was 23.

“I have the assignment to accompany his corpse home,” said Keck recently, remembering the solemn train ride almost six decades ago. Keck was stationed at Fort Jackson, South Carolina, shortly before the end of his five-year service in the Army.

His job was simple in some ways – he escorted the body home, made sure it was properly received at a local funeral home, and then watched over the dead soldier’s body daily for five days until the deceased soldier was buried.

“I was young then. It was a job that I had to do. I probably didn’t think about it much because it was a job I was ordered to do. “

As is so often the case, time changed his view of this assignment; other events showed the seriousness of what he had been assigned to do.

The first of these events was his own personal tragedy – the loss of a son who died in a car accident in 1983.

“When a family loses a child, it’s not the same as losing a spouse,” he said. After losing his own son, Keck began to think back to 1966 when he escorted Pfc’s body. Bryant returns to the late soldier’s hometown of the deep loss his parents must have felt.

Five years later, in 1988, Keck said he and his wife Donna were visiting the Vietnam Memorial Wall in Washington, DC when he found Bryant’s name engraved on the memorial.

“Then I told my wife that one day I wanted to go back to this grave and visit the family.”

The only problem, Keck said, was that he couldn’t remember the name of the town, funeral home, or church where the soldier was buried.

“I have family in and around Richmond, Virginia, and I asked them to see if they could find a cemetery with his headstone and name on it, to no avail.”

He made further attempts to find the tomb, but all were equally unsuccessful, although he still had hope of finding his way around at some point.

Then came a house cleaning project last month that saw Keck discover many of his military papers.

And there, in his old briefcase, were the orders he had received so many decades ago, in such good condition that they looked like they had been freshly typed that day – and they clearly showed that the corpse was for Dunkum Funeral Home in Dillwyn.

“It was June 4th when I pulled out the records and found the orders,” recalled Keck.

An internet search revealed the funeral home was still up and running, and a quick phone call put him in touch with Karen Dunkum, whose family has run the funeral home for generations. She wrote down the relevant information, then hung up.

Less than half an hour later, she returned Keck’s call.

Yes, she said they still had all the relevant documents. Yes, they had the name of the church he was buried in – Maple Grove Pentecostal. And yes, he still had a family that lived in the area, Bryant’s younger brother who was now 75 years old.

And one more piece of information – that day, June 4th, when Keck found the old military files and contacted Dunkum, it was Bryant’s birthday. That day he would have turned 78.

Bryant’s brother, Richard Bryant, remembered Keck and said he was dying to see him again. So Keck and his wife drove to Dillwyn early that morning on June 13th.

There, he said, they met Richard Bryant and Karen Dunkum. They attended church in Maple Grove Pentecostal that morning, and after that the group went to Bryant’s grave, where Keck placed flowers and an American flag.

“It was very emotional for me, I broke down,” he said, getting serious at the memory. “I have such a true, sincere love for my country and for these men who have died. It’s hard to talk about sometimes, even now … It’s a real connection, I’m telling you. “

Keck said that while it was normal to think about those who died on duty on Memorial Day and thank those who served on Veterans Day, other holidays, like Independence Day, remind him of men and women like Bryant who sacrificed their lives in the service of the nation.

For Keck, he said, the trip last month, so many years after that first train ride to Dillwyn, “was something I had to do. It was all out of respect for him and his family. “

Laughter and joy return to the North Bend Pool