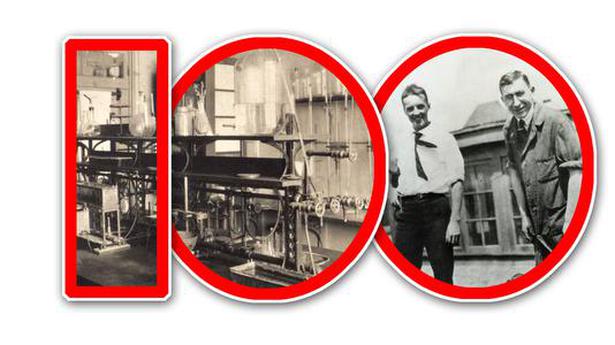 Banting and Best produced a spectacular success story a century ago, giving hope to people with diabetes

Despite the pandemic, 2021 is a year to celebrate, as it marks the centenary of one of the most significant breakthroughs in the history of medicine – the discovery of insulin in 1921 at the University of Toronto, Canada.

The discovery is so dramatic that several films have been made of it. The main actor of the drama is Fredrick G. Banting, whose name is synonymous with it. Her birthday, November 14, is celebrated as World Diabetes Day.

Banting completed his medical studies at the University of Toronto in December 1916, but as World War I broke out he was soon drafted into the military. He was wounded at the Battle of Cambrai in 1918, but he continued to treat other wounded soldiers, and for this he was awarded the Military Cross. It shows his stoicism, a trait that will help him later in life. He returned to Canada and continued his training in surgery and studied orthopedics. As his private practice was unsuccessful, he began teaching medical students at the University of Western Ontario.

One night, tired, he fell asleep after reading an article on Moses Barron’s pancreas. At 2 a.m., he is awakened by a dream which makes him understand that binding the pancreatic duct with a ligature would cause degeneration of the cells of the pancreas concerned with digestion, but would leave the islets of Langerhans intact. Banting suddenly realized that if there was a hormone in these islets that lowered sugar, it could be extracted and used to treat diabetes, and it became an obsession for him.

He approached JJR Macleod, professor of physiology at the University of Toronto, with a request to allow him to conduct experiments to isolate this hormone. Initially, Macleod was reluctant because many famous scientists like Naunyn, Minkowski and Mering, Opie, Sharpey-Schafer and Nicholas Paulesco had failed.

Macleod eventually provided Banting with the lab facilities, a few dogs to experiment with, and also a student, Charles Best, as an assistant. Macleod gave them a few weeks to complete their experiments, as he went on vacation to Scotland.

The story of how Banting and Best struggled during the summer of May 1921 (one of the hottest summers of the time) without air conditioning and with rudimentary equipment is very interesting to read. Experiment after experiment failed and dog after dog died. Banting had to surreptitiously procure dogs from the streets of Toronto. As a surgeon, he performed the surgeries, while Best measured the dogs’ blood sugar. When the pancreas was removed, the dogs were severely diabetic.

From the pancreas, Banting and Best tried to extract the mysterious internal secretion, then injected it into diabetic dogs to see if their blood sugar levels would drop. After a series of failures, one day in July 1921, history was written when they discovered that a dog’s blood sugar was starting to drop.

Macleod returned from his vacation, and although initially didn’t believe the results, he soon became convinced that there was indeed a hormone in the islets of Langerhans that lowered glucose levels. Banting suggested the name isletin, but Macleod convinced him that the name insulin was better because it comes from the Latin word. Insulate meaning island, a name suggested years earlier by Sharpey-Shafer.

Human clinical trials began in January 1922 and Leonard Thompson, a 14-year-old boy who was dying of uncontrolled diabetes, was one of the first beneficiaries. He responded dramatically. The first clinical trials were not very conclusive, however, due to the crude nature of the extracts prepared by Banting and Best.

Edmonton biochemist James Collip, who had been brought on board, helped purify the insulin. This helped prevent side effects such as fever and abscess formation at the injection site. Soon the lives of dozens of children who were dying of diabetes were saved after the insulin injections were administered. One of the greatest breakthroughs in modern medicine had been made!

The University of Toronto licensed the production of insulin to Eli Lilly & Co. in the United States who, within a year, were able to mass produce insulin.

Until 1921, the lifespan of a child with type 1 diabetes ranged from three months to a maximum of two or three years. The latter was only possible if extreme starvation diets were administered that barely kept children alive until they died of diabetic coma. With the discovery of insulin, all of that changed forever and children with type 1 diabetes were saved from death.

Indeed, the discovery of insulin led to the awarding of the Nobel Prize for Medicine in 1923, barely a year after the first clinical trials of insulin. It’s sort of a record in the annals of the Nobel Prize. However, the price itself has been embroiled in controversy. The Nobel committee awarded the prize to Banting and Macleod. Banting alleged that Macleod had nothing to do with the find and insisted that it was Charles Best who deserved it and he therefore shared his share of the cash prize with Best. Not to be outdone, Macleod said it was Collip’s purification of insulin that led to the large-scale use of insulin and therefore he shared his prize money with Collip. So ultimately, there was enough fame for the four insulin co-discoverers: Banting, Best, Macleod, and Collip.

Insulin quickly became commercially available in most countries. Canada, the United States, the United Kingdom and Europe were the first users. India, then under British rule, also quickly obtained insulin. The big question was whether insulin, being a protein, would work in a hot tropical country. Several papers published in India in the 1920s showed that if insulin was stored in the refrigerator, it would not lose its potency.

Always out of reach

If the discoverers of insulin were alive today, they would probably be miserable. It is a sad fact that even 100 years after its discovery, the lives of children with type 1 diabetes are still lost due to several factors. First, despite an adequate global supply of insulin, its accessibility remains a problem in many developing countries. Second, it is still unaffordable not only for people in developing countries, but even in some developed countries, even the United States.

As we celebrate the centenary of the discovery of insulin, I have a dream that not a single one of the 1.5 lakh of children with type 1 diabetes in our country will die due to lack of affordability or accessibility. insulin.

I had the privilege of participating in the World Health Organization’s â€œGlobal Diabetes Compaqâ€, a white paper produced in connection with the centenary of insulin, which was sent to all of its member countries. One of the fundamental aspirations of governments in this report is that everyone with type 1 diabetes around the world has access to insulin.

Indeed, insulin should become a basic right of all human beings just like food, water or clothing. If that happens (and I hope it will, and soon), it would be the best way for us to celebrate the historic discovery made by Banting and his colleagues in the summer of 1921.

(The author is the president of Dr. Mohan’s Diabetes Specialties Center, Chennai)